View source
"The Prime Evils are gone. But even the Lesser Evils of the Burning Hells can destroy worlds, should they choose. Some say they are even more dangerous."

The Lesser Evils are a collective of powerful and influential demon lords. They are "lesser" when compared to the three Prime Evils, but are still exceptionally powerful in their own right.

The Lesser Evils were spawned from four of the seven heads of Tathamet. Compared to the Primes, mortals have gathered far less information on them. Like the Prime Evils, each of the Lesser Evils ruled over their own realm in Hell.

The end of the Sin War created a rift between the Prime and Lesser Evils. Part of this rift was that the Primes had kept the existence of Sanctuary secret from the Lesser Evils,[1] but furthermore, the Prime Evils appeared more interested in swaying humanity to their cause. This caused the Lesser Evils to question the authority of the Three.[2]

In their ignorance, the Lesser Evils began to believe that the Three were afraid to continue the war with Heaven.[2] They considered themselves innately superior to humankind, and that the Eternal Conflict was theirs alone to fight.[1] Frustrated by the cessation of the war, Azmodan and Belial saw the situation as their chance to overthrow the Prime Evils and take control of Hell for themselves.[2] Belial manipulated Azmodan into revolt[3] and the demon lords made pacts with their brethren, assuring them that humanity would not deter them from seizing victory in the Eternal Conflict.[2] Andariel and Duriel had their doubts at first, afraid that they would fall in the coming conflict. Belial however, kept them in the fold.[4] Azmodan and Belial devised a plan to end the stalemate, achieve victory in the Sin War and ultimately ride the bloody crest of the Great Conflict straight into the very arms of Armageddon. Thus, a great revolution was set into motion as all of Hell went to war against the Three Brothers.[2]

Hell became embroiled in civil war as the Lesser Evils turned against the Primes, culminating in the banishment of the Primes to Sanctuary, where Azmodan hoped that they would remain trapped forever. Azmodan believed that with the Three set loose upon humanity, Heaven would be forced to turn their focus upon the mortal plane, thus leaving the Gates of Heaven abandoned and defenseless.[2] Those few demons who still pledged allegiance to the Three Brothers fled the wrath of Azmodan and Belial, escaping to Sanctuary to seek out their lost masters.

As the fires of war died down, Azmodan and Belial began to argue over which of them held the higher authority. The pact that they had made quickly fell to ashes as the two demon lords took up arms against each other. The legions of Hell that remained were polarized behind either warlord, launching themselves into a second civil war.[2] One account states that there was no falling out however, and that the two Lesser Evils began a scheme to subjugate all life to their will.[1] In truth however, the two lords did indeed do battle up until at least the Darkening of Tristram, by which point Azmodan had held the upper hand for quite some time.[5] Eventually, both Lesser Evils would turn their attention to Sanctuary.[6]

In the aftermath of the Darkening of Tristram, Diablo possessed a mortal host and departed the village, intent on reuniting with Mephisto and Baal. Andariel and Duriel concluded that the Primes would inevitably reclaim their position in Hell. Therefore, they endeavored to gain favor with the Lord of Terror by protecting his human host. However, both met their end at the hands of a group of heroes, who went on to defeat the Prime Evils as well, thus leaving Azmodan and Belial as the last lords of Hell.[1]

Two decades later, both Azmodan and Belial were defeated by the Nephalem. However, along with all of the other Great Evils, they were absorbed into Diablo via the Black Soulstone, allowing him to be reborn as a singular Prime Evil. However, he too was defeated by the Nephalem.[7] However, the stone was taken by Malthael, and in battle with the Nephalem, shattered the stone before drawing the essences of the Evils into himself. After his defeat, Malthael's body disintegrated, Diablo was released,[8] still containing the essences of the other Evils.[9] Eventually however, each of the Evils broke away from Diablo.[10] 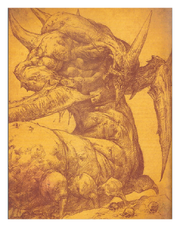 Duriel, the Lord of Pain, is the "twin" brother of Andariel. Though Duriel had his part in the Dark Exile, he once again aligned with the Three. Sent to guard Tal Rasha's Chamber. Specializes in heavy melee attacks and uses ice as an aura and has the appearance of a giant bug. His other title is the Maggot King. 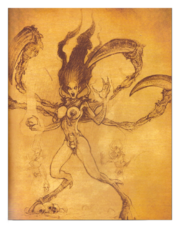 Andariel, the Maiden of Anguish, is the "twin" sister of Duriel. Sent to guard the Rogue Monastery by Diablo himself. Specializes in mid range poison attacks but ironically enough is weak against the element of fire. She is the only female member of the Seven and is the first to fall in the series. Her other title is the Demon Queen. 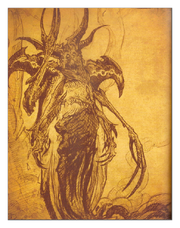 Belial, the Lord of Lies, is one of the leaders of the rebellion against the Three. Uses fire for both phases of his fight with heroes: on the 2nd phase, he'll dig his massive claws into the ground, breathe huge gusts of fel flame and make fiery eruptions. Throughout the game, he possesses Emperor Hakan II during the Scouring of Caldeum as he attempted to claim the Black Soulstone. 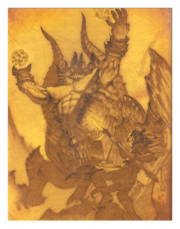 Azmodan, the Lord of Sin, is one of the leaders of the rebellion against the Three. Throws fire boulders, summons demon gates to call upon minions, rains dead bodies upon enemies, and calls forth dark magic in a large AoE. Azmodan is said to be a brilliant tactician of the Demonic Army, having almost defeated Archangel Tyrael and the Heavenly Host on many occasions, and considers Belial to be his chief rival. He was also the last Great Evil to be sealed in the Black Soulstone.