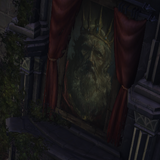 Leoric's Manor was the seat of the King Leoric, prior to his transformation into the Skeleton King at the hands of Archbishop Lazarus. It is featured in Act I of Diablo III. It can be found in the northwest part of the Leoric's Hunting Grounds. Leoric's Shinbone can be found here in the PC version.

This location article is a stub. You can help the Diablo Wiki to become more awesome by expanding it.

This section contains facts and trivia relevant to this article.
Act I Zones (Diablo III)
Retrieved from "https://diablo.fandom.com/wiki/Leoric%27s_Manor?oldid=172876"
Community content is available under CC-BY-SA unless otherwise noted.