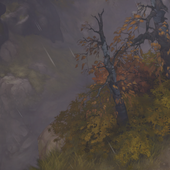 Leoric's Hunting Grounds are a location in Act I of Diablo III. These hunting grounds used to belong to King Leoric and surround Leoric's Manor.

This small zone is located between the Leoric's Manor and the Northern Highlands waypoints. The zone usually spawns a couple chests, has a Healing Well, and a couple of shrines. There is also a high chance for the goatman portal run by 3 destructable khazra totems to spawn.

The Highlands Cave rare dungeon can spawn here. The fastest way to get to the cave is from the Northern Highlands, follow the footpath north.

There are usually 2-3 rare packs of monsters here.

Add a photo to this gallery
Act I Zones (Diablo III)
Retrieved from "https://diablo.fandom.com/wiki/Leoric%27s_Hunting_Grounds?oldid=139706"
Community content is available under CC-BY-SA unless otherwise noted.