Start a Wiki
watch 01:50
The Loop (Games)
Do you like this video?
For the similarly named realm, see Plane of the Dead.

Land of the Dead is a Reanimation Necromancer skill in Diablo III.

When cast, transforms the Necromancer into a dark figure for a short time. Visually, the 60 yards radius area (nearly the entire screen) around the Necromancer will be littered with dozens of graves (the zone follows the Necromancer if they move). Any area of the Land of the Dead targeted by a corpse-consuming skill will count as having up to 10 corpses, not consumed in the process.

Land of the Dead gives the Necromancer unlimited corpses for its duration. However, unlike other Shapeshift skills of other classes, it DOES NOT liberate or protect the character from Crowd Control effects.

The Land of the Dead can be combined with Revive, in which case it will generate Skeletal Shieldbearers. 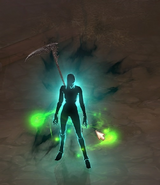 Gravestones
Add a photo to this gallery