Start a Wiki
watch 01:51
The Loop (Games)
Do you like this video?
Lacuni Huntresses (a.k.a. Lacuni Stalkers) are Beast lacuni enemies in Diablo III found in Act II and Act III.

They are much faster than the male Lacuni Warriors, and may jump a great distance to get closer to the player. Like in Diablo II, they will use grenades to attack from distance: these grenades have very small blast radius, but deal significant Fire damage, and can be thrown over walls.

In melee combat, they deliver fast blows with their claws. Lacuni Huntresses will often ambush the player (hiding beneath the sand or on the cliffs), and are usually encountered in large groups. Sometimes they are accompanied by male Warriors. 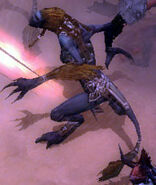