This is about the weapon type Katars. For the individual weapon, see Katar.

Katars are weapons that only Assassins can use in Diablo II: Lord of Destruction expansion. To any other class, Katars have a very slow attack speed but have a very fast attack speed when used by an Assassin. Katars can also be dual-wielded by Assassins, but only one will be used if they are using Martial Arts charge combos.

Katars (even those that are magical or rare) sell for far less gold compared to other weapons, even if they have potent magical effects. They are also the only class-specific items available for purchase from any shopkeeper who sells martial weapons, likely due to the Assassins' dependence on claw-class weapons.

Katars also make a comeback in Diablo III, but are known as fist weapons. They are often used by Monks. 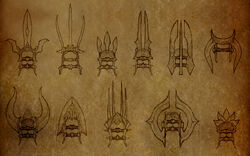