View source
watch 01:07
What is Kanai's Cube?
Do you like this video?
Play Sound

"The artifact known as Kanai’s Cube is said to have incomprehensible powers of transmutation. Certainly, the services this item can provide will enhance your potential to incredible levels, including personal customization and impressive mastery over the many treasures you have uncovered throughout your journey. I wonder...will it be worth the cost?"

Kanai's Cube is an ancient device found in the Tomb of King Kanai in Diablo III. It was added in patch 2.3.0.

In terms of gameplay, it is the spiritual successor to the Horadric Cube of Diablo II.[1]

At the beginning of the Hunt for the Three, the Horadrim realized they would need an artifact of immense power.[2] Such an artifact came in the form of a device simply called "the Cube." Designed by Zoltun Kulle[3] the Horadrim forged the Cube over a period of weeks, as smiths hammered and mages chanted, feeling their sanity slipping all the while.[4] The Cube was completed, but was marred by the dark methods used to complete it and disastrous results.[3]

For an extended period of time,[2] the Horadrim used the Cube as they hunted the Prime Evils.[3] In time, the Cube became the center of Horadric works. Every initiative or action required it, and those who survived its creation became increasingly haunted by its presence.[4] Aware of the dangers of corruption,[2] and of the Cube's marred design, the Order determined that it was too dangerous for anyone to continue using it.[3] That it had to be hidden from anyone, including them.[4] Of all the Horadrim, only Kulle objected to the abandonment of the device.[2] As such, they created the weaker Horadric Cube in its stead, and entrusted the first Cube to a secret organization of Barbarians on Mount Arreat, who kept it safe from everyone, including the rest of their tribe. Throughout the years, these Barbarians served as guardians over the Cube, keeping it safe from prying eyes and those who would use its powers for evil.[3]

In 1265, the cube was guarded by the elder Kanai,[3] and was his most prized possession.[5] It was buried beneath Sescheron. As the Army of Destruction overran the city, Kanai was killed. However, his spirit could not rest, due to the destruction of Mount Arreat and the Worldstone. Doomed to stand eternal vigil over his home and greatest treasure, he awaited a powerful and honorable individual to whom he might pass on his task.[3] Such an individual came in the form of the Nephalem, as the hero(es) and the spirit of Zoltun Kulle were able to retrieve the artifact and unlock its power.[6]

Players may obtain the Cube if they survive through what remains of Sescheron and open the ancient king's lost tomb. It is found in the Elder Sanctum, within The Ruins of Sescheron in Act III on Adventure Mode only.

The Cube itself functions much like an artisan once acquired, and will be available for use by all heroes on the account (effectively being a fourth artisan). It has several potent abilities, including, but not limited to:

An important quality of life addition (compared to the Horadric Cube interface) is that the Cube uses smart materials allocation: one may put more materials than needed into the Cube, the excess will simply be returned to inventory. There is no need to split materials into smaller packs with exact numbers.

As of patch 2.5.0, Kanai's Cube also has a Fill button, which automatically fills it with the required materials for the active recipe.

"...all agreed the Cube was necessary if the hunt for the three was to be successful. They thought they understood the dangers."

Kanai's Cube can extract and store powers from nearly all Legendary and Set items with special (orange) secondary affixes. Characters can equip three such powers like passive abilities at a time.

During Season 22, Kanai's Cube received a 4th slot that can be filled with any power normally allowed in the other three, but a duplicate power will not stack.

"Still, none could deny the transcendent power of the cube. With its might, the impossible seemed to be within their grasp..."

"But one of their number came to realize the growing danger. A simple errand led him away from the others, and he experienced a moment of clarity that would change the fates of all."

"He called the nine together, and declared that the cube must be put away, hidden even from them. Perhaps from them most of all. Seven of the nine concurred, and so the cube was taken, under cover of darkness, entrusted..."

The resulting material matches the rarity of the item used to perform the transmutation. Can only convert salvageable materials, so Death's Breath may not be received in result.

"...in time, the cube became the center of the Horadric works. Every initiative or action required it, and those who survived its creation became increasingly haunted by its presence."

Allows converting exactly 9 gems (obviously, not Legendary Gems) of the same color and same quality into 9 gems of that quality and another color (of player's choice).

"For weeks, the fires burned, the smiths hammered, and the mages chanted. Those who spent too long in the forge wandered, wide eyed and unblinking, in the daylight. They did not sleep."

This recipe allows characters to completely re-roll all affixes on any Legendary or Set item. The item is treated as if it just dropped anew: all Enchanting, dye, and Transmogrification modifications, as well as sockets from Ramaladni's Gift, are removed.

Reforged items may re-roll as Ancient, Primal, or non-Ancient items, regardless of the item's original quality. The actual exact chance to roll and Ancient or Primal Ancient item is unknown: different calculations show results between 1% and 10%.

Note that because outdated items (buffed since the original drop) are technically different items with different in-game IDs, re-rolling an outdated item will NOT update its since-modified attributes and Legendary affixes.

"...of the cave, ten Horadrim channeled powers, arcane and mystic. Ten felt their sanity slipping away. And nine averted their eyes as the cube came alive."

When used, replaces a Set piece with another random item of the same set, as a fresh roll, nullifying all modifications. The new Set item will never roll as an Ancient Item, even if the old one was Ancient.

Only set items belonging to sets of at least 3 items may be converted.

"When the physical material of the cube was forged, the real work began. Ten Horadrim took it deep into the cave, to a place that should never have been disturbed."

Turns a level 70 Rare item into a random Legendary or Set item of the same item type. The probability of rolling a specific item for a given class varies with that item's normal drop rate. Thus it cannot award items from Horadric Caches. All modifications are lost, but any gems socketed are returned to inventory.

Overall, it may be an efficient way of farming specific Legendary items or missing set pieces, even more effective than gambling from Kadala. It is especially useful when options for a class are limited — for example, there are only so many class-specific items, so the chances of rolling the desired one are pretty high.

"...was done, and the scars would remain forever. And so it was time for the final step, the one each of them had secretly hoped would not come to pass."

If rolled, sets Character Level requirement of that item to 1, without any other effect. Cannot be used on Legendary Gems, but can be used on items of any quality (including Set items). Does not occupy any affixes or sockets.

This recipe is of little use to regular characters, due to the fact that death is not a permanent setback in that mode. On the other side of the coin, however, it can prove extremely helpful for any Hardcore character, whether in a Season or not, so long as the player has a good set of equipment in their stash to fall back on in the event of a character's untimely death.

"Some of them still felt the dark lust the cube has awoken in their hearts. They felt the absence of the cube keenly for rest of their days. Some even plotted to find it."

When transmuted, it will upgrade the item by adding +5 to the core attribute of player's choice (see below) for each rank of the Legendary Gem consumed in the process. While the recipe can be used multiple times on the same item, it is not additive: the new bonus will overwrite the old one, even if the new bonus is lower.

The enhancement is applied as a separate modifier, displayed below the other affixes; it is not affected by any other affixes an item may have. The core stat gained is determined by the color of the Flawless Royal gems consumed.

"Natala's sacrifice saved the Horadrim from themselves, but her name must be stricken from the texts"

Natala's Prayer was a future planned recipe for Kanai's Cube, expected to come after patch 2.5.0.

Opens a portal to the secret levels:

Converts a page of Black Rock Ledger into a page of same number from the World of Warcraft lore book, Green Hills of Stranglethorn. There is a total of 6 different pages.

Kanai's Cube in the Tomb of King Kanai

The Nephalem and the Cube in the camp 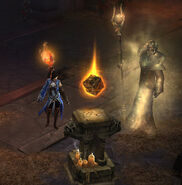 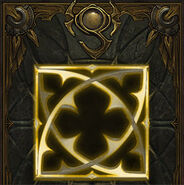