"The angel Izual was once Tyrael's lieutenant, but he was captured by the enemy after an ill-advised assault upon the Hellforge. Izual surrendered to demonic corruption and revealed the secrets of the soulstones to the Prime Evils. Tyrael claimed that Izual was slain years ago, but his replacement has never emerged from the Crystal Arch..."

Diablo II
Diablo III
Diablo III: Reaper of Souls (mentioned only)
To Hell and Back
Book of Tyrael

Izual was a fallen angel-turned servant of the Burning Hells.

Izual was once an angel in service to the High Heavens, and served as the most trusted[1] lieutenant of Tyrael during the Great Conflict.

[2] The two were close friends, and would walk together in Heaven.[3] Bearing the runeblade Azurewrath, Izual came to be venerated for his deeds.[2] One key moment of his career was the Fifth Battle of the Diamond Gates, where the Prime Evils reached the very gates of the High Heavens. Izual, however, turned them back.[4]

The beginning of Izual's fall from grace came when he led an assault on the Hellforge—an assault against Tyrael's wishes, but was carried out nonetheless.[1] A new demonblade, Shadowfang, was nearing completion, and Izual was intent on destroying both the wielder and weapon. Izual, however, was overcome by the demonic legions[2] and was captured by the Prime Evils. Twisted by their perverse power, he betrayed his own kind and give up Heaven's most guarded secrets. He became a corrupt shadow of his former self—a fallen angel trusted neither by Heaven nor Hell.[1] To add insult to injury, Izual's spirit was bound within the form of a terrible creature which was summoned from the Black Abyss.[1]

The demon, Rakanoth, served as Izual's jailer during his time of imprisonment, but eventually abandoned the angel to roam the Plains of Despair.[4]

"Tyrael was a fool to have trusted me! You see, it was I who told Diablo and his Brothers about the Soulstones and how to corrupt them. It was I who helped the Prime Evils mastermind their own exile to your world. The plan we set in motion so long ago cannot be stopped by any mortal agency. Hell itself is poised to spill forth into your world like a tidal wave of blood and nightmares. You and all your kind...are doomed."

Centuries passed between the Dark Exile and the re-emergence of the Prime Evils, but eventually, the time came where the plan Izual had set in motion came to pass. Diablo, now fully in control of his mortal host, returned to Hell...albeit with a group of heroes led by Tyrael in pursuit. From the Pandemonium Fortress, Tyrael requested that the heroes put the soul of his old comrade to rest, believing that Izual had suffered enough. The heroes obliged, but found that Izual was past redemption. The fallen angel told them of the role he had played in the Dark Exile and proceeded to engage them in battle. Though long bereft of Azurewrath, Izual was a formidable foe, but the heroes were still able to strike him down.[1]

"It seems we've both fallen from grace, Tyrael. Come, embrace your former lieutenant!"

20 years after being struck down in Hell, Izual, now reborn, was called to serve Diablo[3] during his hellish invasion of the High Heavens following his resurrection as the Prime Evil. The Nephalem and a now-mortal Tyrael encountered him while pursuing Diablo through the Great Span. Izual showed great amusement about how Tyrael had become a fallen angel like himself. However, history repeated itself and Izual was once again struck down.[4]

In Diablo II, players encounter Izual wandering on the Plains of Despair in the game's fourth act. His exact location is randomized, but upon approaching him, the quest log notification should appear and Izual can be heard grunting, "Save yourself!"

Izual mainly uses melee and cold attacks, so it's useful to have some cold resistance. His Frost Nova can be a nuisance to deal with and Izual has a lot of health. However, he has no other special abilities, making the encounter a pretty straightforward fight. In Normal, Frost Nova has a fifteen-second Chill duration, which increases to eighteen and twenty-two in Nightmare and Hell, respectively. As stated previously, there is Cold damage added to his attacks. In Normal, the addition is 7-15 damage with a two-second Chill and increases to 24-39 with a three-second Chill, and 49-78 with a four-second Chill in Nightmare and Hell difficulties.

In Diablo III, Izual appears as a boss during the quest Prime Evil, shortly before the nephalem reaches the Crystal Arch in Act IV. His model is almost identical to his previous model. As before, he fights with his Frost Nova, but instead of a sword, he now utilizes a giant mace. He can also summon Oppressors, Corrupted Angels and Tongue Lashers to his side.

Defeating him will unlock his lore entry.

The battle begins only after the player enters the blue crystal-framed circular arena with the hole in the middle. In combat, Izual moves and attacks quickly, using four attacks:

A player who makes use of a set of Ice Climbers and a Talisman of Aranoch may have a somewhat easy time against Izual; his cold attacks are useless against them. This, however, still leaves them vulnerable to the Opressors and Corrupted Angels that are summoned.

Upon defeat, Izual can drop a Staff of Herding plan, if you don't have one yet.

Cold Snap is the Rift Guardian variant of Izual.

As an angel, Izual possessed great valor and strength. However, his capture by Hell left him a shattered individual, his spirit maddened. By the time he was struck down, anything that remained of his once noble self appeared to be long gone.[1] He has taken on demonic traits, such as the ability to be reborn within Hell.[3] 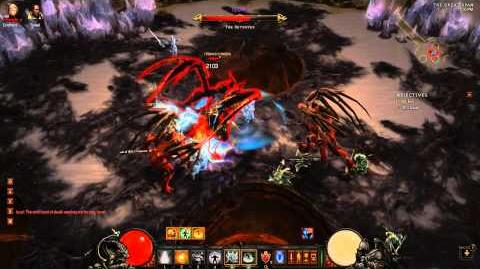 Retrieved from "https://diablo.fandom.com/wiki/Izual?oldid=187839"
Community content is available under CC-BY-SA unless otherwise noted.