Start a Wiki
watch 01:50
The Loop (Games)
Do you like this video?
For other uses of Iron Skin, see Iron Skin.

While the skill lasts, it halves all damage taken. It has no limit on how much damage it can absorb. Can be used while under Crowd Control effects, and breaks existing effects.

Visually, it encases the Crusader in a suit of armor, but is different from (and can be used during the) Akarat's Champion (graphics of the latter suppress the Iron Skin visual). 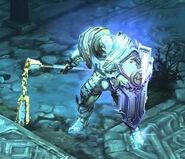