An Inventory is an easily accessible backpack which contains all of the items you have gathered whilst adventuring in Sanctuary. In it, the player carries the items that they can use anytime they want, and what they are not currently wearing (items that are equipped on a character do not count towards the inventory space).

The inventory can become a bit of an annoyance, as it can fill quite quickly (especially later in the game) in the midst of battle, and you may have to leave some pieces of loot behind; using the Town Portal spell on your quick-access bar to empty your overburdened inventory at a merchant is necessary to access and utilize all of your loot. In the endgame, most players stop picking up items they are sure they won't use, making sure the inventory space is conserved.

The inventory of a hero is at its most basic form in Diablo/Hellfire. It is comprised of a 4x10 grid, for a total of 40 slots. Small items, such as a potion or a piece of jewelry, only take up 1 slot, while body armors, two-handed weaponry, and almost all shields take up a 2x3 portion. Weapons can take 1x2 or 1x3 slots. Helms and small shields take 2x2. Gold occupies space too, 5000 per slot, although with Auric Amulet one can store 10,000 gold per tile.

A hero cannot expand their inventory over the course of the journey in the labyrinth, so efficiency must be made a priority, or treasures may just wind up being on the floor, leading to the need to constantly open a portal to Tristram to sell. Since the total amount of items (and money!) in game is finite, it is imperative to sell everything the character finds, or at least everything that will bring more money than the cost of identifying an item.

Items that players do not want to carry around, but will need later, are usually dropped in town, remaining on the ground. However, in the PS1 version of the game, in early versions, one must NOT click the Shrine of Thieves at any circumstances, or must load the saved game immediately after doing so, for it causes all items kept in town to disappear[citation needed].

In addition to all this, each player has a Belt, which can hold up to 8 1-slot items (only Potions and Scrolls, as well as Runes in Hellfire), helping players to conserve space and easily get to the said items in combat.

The Inventory has changed somewhat between the transition to Diablo II/Lord of Destruction. It is still the same 4x10 grid, but there exist items that take up a 2x4 portion, only allowing 5 such items to be carried.

The Stash makes its debut in Diablo II, consisting of an 8x6 grid in the expansion, as well as a separate gold container. This gold container can only house up to 2,500,000 in gold.

If one finds themselves longing for more inventory space than is possible, other items that can do something close to this includes Tomes of Town Portal/Identify which can hold up to 20 scrolls each, and the Horadric Cube which has its own 4x4 grid. These items, however, do require the hero to sacrifice a small portion of their personal inventory, even though the total amount of items they can carry will grow in result.

Belts can still hold Potions and Scrolls only, but the capacity now depends on the type of belt equipped: 4 items (no belt), 8 (simplest of belts), 12 (high-tier belts) and 16 (top tier belts, as well as all Exceptional and Elite belts).

As an extra measure of conserving inventory space, expansion characters can carry a second set of weapons that does not occupy any tiles.

In Diablo III, the Inventory has been reworked countless times over the course of development (both visually and functionally), and in the released version, it is totally different from the D1 and D2 inventories.

The inventory has been expanded to 6x10 pattern (60 total slots). Jewelry, potions, Gems, crafting materials, and Belts take up 1 tile each, and in addition gems and materials can stack up to 100, 1000 or 5000 in one tile. The Belt storage is gone, but one type of Potion can be bound to a hotkey. All armor and weapons except Belts occupy 1x2 tiles, regardless of type: that is, a minimum of 30 and up to 60 items can be carried at once.

Once all the slots are full, picking up new items will not be possible until some are sold to a vendor, removed from the inventory by throwing items away or placing them in the stash. As a first for the series, items key to quest completion do not take up inventory space.

While the personal inventory your character begins with cannot be expanded, the stash can be upgraded, allowing to purchase extra tabs and rows. Each of 6 available tabs will have 7x10 slots.

In console version of the game, the inventory is instead limited to 60 (80) items of either type; there is no tile management, but rather a sorting of items by type in a list form.

In Patch 2.1.2, a highly requested feature was added to the game, item locking. This made it possible to favorite an item, making it unable to be salvaged or destroyed without removing the lock from said item (Ctrl F & R). 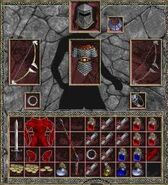 Inventory in Diablo I

Diablo III Inventory (console version)
Add a photo to this gallery
Retrieved from "https://diablo.fandom.com/wiki/Inventory?oldid=147900"
Community content is available under CC-BY-SA unless otherwise noted.