View source
watch 01:54
Arcane: League of Legends - The Loop
Do you like this video?
Play Sound

Inner Sanctuary is a Defensive skill used by the Monk in Diablo III.

When cast, creates a glyph on the ground, centered on the Monk, forming an 11-yard range area for a short time. The Monk and allies standing in this circle suffer less damage from all enemy attacks. The circle doesn't follow the Monk.

Unlike other Monk defensive skills, Inner Sanctuary actually has animation, and therefore cannot be cast on the move.

Originally, the Monk was supposed to have a similar skill named Impenetrable Defense. In the final game version, it was replaced with Serenity and Inner Sanctuary. 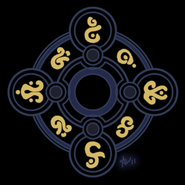