"I did not think anything could make me more miserable than I already was, being dragged from camp to camp by ignorant cultists, but then these ice porcupines began to show up in the night to harass me with their ice quills. Unfortunately, being caged, I could not beat them off with my shoe."

Ice Porcupines are Beast enemies in Diablo III, added in patch 2.3.0. They resemble Quill Fiends, yet are larger and are only encountered in Ruins of Sescheron and Eternal Woods in Act III.

Like their lesser counterparts, they may attack in melee with their claws, but prefer to fire ice quills from distance. Unlike Quill Fiends, however, they can target a location instead of enemy, can shoot over walls and obstacles, and hit with a barrage of 5-7 quills instead of a single missile. These quills do not count as projectiles. Alternatively, a single quill can be fired normally.

Having more Life and dealing more damage than Quill Fiends, they are encountered in fewer numbers. 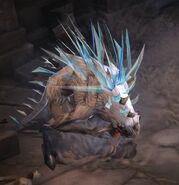 Add a photo to this gallery
Retrieved from "https://diablo.fandom.com/wiki/Ice_Porcupine?oldid=166761"
Community content is available under CC-BY-SA unless otherwise noted.