The Horadric Mages, after binding Baal within Tal Rasha, magically sealed off his Burial Chamber from the mortal realm. Those same Mages also crafted fearsome Horadric Staves and imbued them with the special power to open the Chamber’s hidden door... - Deckard Cain

The Horadric Staff is the second quest of Act II in Diablo II. The quest starts with the player bringing the Horadric Scroll that was found in the Sewers, to Deckard Cain. It is one of the longest quests of the game.

Cain will tell about the Horadric mages of old, who crafted fierce staves and imbued them with the power to unlock Tal Rasha's burial chamber. However, after nearly losing such a staff to the thievery of a rogue sorcerer, the Horadrim decided to sever the staves into two parts and scatter the pieces so they could be safeguarded, and to prevent the key to Tal Rasha's Tomb from falling into the wrong hands. The quest involves finding Tal Rasha's Tomb, wherein Baal lies imprisoned. The player sets out on a search for the two pieces that comprise the Horadric Staff: the shaft and the headpiece, as well as an ancient artifact, the Horadric Cube, that can transmute the pieces into a Horadric Staff.

This artifact is hidden deep within the Halls of the Dead in the Dry Hills. There is a waypoint hidden on level 2. Be prepared to battle your way through legions of Undead and many other enemies. The Cube is located in a gold chest on level 3 that is guarded by Bloodwitch the Wild. After obtaining the Cube, the player must return to town and speak with Deckard Cain. He will explain the qualities of the cube, as well as other useful information about it. The most important of which is the fact that the cube can be used to transmute items into other items. (For a list of these "recipes," see the Horadric Cube article.)

After obtaining the Horadric Cube, the player must travel to the Far Oasis adjacent to the Dry Hills. Here, he/she must find the Maggot Lair. The entrance looks like a tunnel dug into the sand dunes. It is the dwelling place of a plethora of insect-like enemies, such as the Sand Maggot, Scarab Demon and Swarms. At the 3rd level of the Maggot Lair lies the Super Unique Sand Maggot matriarch, Coldworm The Burrower. This boss has the ability to spawn full grown Sand Maggot monsters, but the chief danger here is the intense poison damage coupled with the frost nova Coldworm unleashes upon death. After her defeat, open the gold chest in the room. In it, the player will find the Horadric Shaft, which Deckard Cain will identify as the Staff of Kings, the shaft portion of the Horadric Staff.

Now it is time to get the headpiece and complete the Horadric Staff. Travel to the Lost City, located off the Far Oasis, and a sudden eclipse will darken the sky; the quest notification

pops up. This triggers the Tainted Sun quest, and both quests conveniently have the same destination, the Claw Viper Temple. The Temple is hidden within the Valley of Snakes, adjacent to the Lost City, and is filled with demonic Claw Viper and Salamander monsters. At the second level, more Claw Vipers and a Super Unique, lightning enchanted monster called Fangskin awaits the player. Defeat the monsters and break the Tainted Sun Altar. Not only does this complete the Tainted Sun quest, but it also yields the Amulet of the Viper, the missing headpiece of the Horadric Staff.

Upon locating the Canyon of the Magi and the True Tomb of Tal Rasha, the player must search for a magical orifice hidden deep within the tomb. The orifice is located in a chamber with symbols of the Seven Tombs on the floor. Place the Horadric Staff within the orifice and behold as the entrance to Tal Rasha's burial chamber is revealed, completing this convoluted quest. The Horadric Staff cannot be retrieved, so if you've been using it as a weapon, make sure that you have a new one. Regardless, be prepared for a fight against the Act Boss, Duriel. 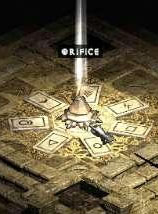 Retrieved from "https://diablo.fandom.com/wiki/Horadric_Staff_(Quest)?oldid=171945"
Community content is available under CC-BY-SA unless otherwise noted.