Start a Wiki
watch 01:50
The Loop (Games)
Do you like this video?
For the similarly named living siege towers, see Demonic Hellbearer.

Hell Bringers are a form of demonic structure found mostly in the Fields of Slaughter, Arreat Crater and other zones in Act III. They are often located in the middle of rings or triangles of demonic Mine Fields, or amidst hidden Tormented Stingers.

They serve as battlefield fortifications for the Army of Sin. When the enemy comes close enough (roughly 40 yards), they release long tentacles to grab the target and pull it close to itself (often into minefields) with a small delay. When the enemy is very close, they can also produce flames to cause fire damage in a small radius to the player.

While Hell Bringers count as enemies, and even give experience upon destruction, they drop no loot. 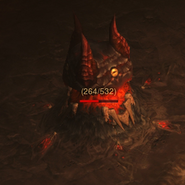 Add a photo to this gallery
Retrieved from "https://diablo.fandom.com/wiki/Hell_Bringer?oldid=170945"
Community content is available under CC-BY-SA unless otherwise noted.