View source
watch 02:56
Raise a Floppa - The Loop
Do you like this video?
Play Sound
For other uses of Globe, see Orb.

Health Globes or Health Orbs are a new type of objects seen in Diablo III and Diablo Immortal.

Health Globes have been touted as the spiritual successor of the Potion system in Diablo and Diablo II. Health Globes are red-colored globes that replenish the Life of the character. They have some chance (usually 15%) to be dropped by most of the monsters on death, or whenever they lose a portion of their health (25% for elites, some bosses may drop them as often as every 10% life lost). At the moment, they replenish a percent of the player's life, increased by respective secondary statistic, over 1 second. Every globe restores approximately 10% of the maximum Life.

The secondary property "Health Globes and Potions Grant +xx,xxx Life" increases the Healing gained from Health Globes, as well as Potions. Maximum healing bonus is 207991 (rolls up to 29713 on Jewelry, Boots, Chest Armor, Helms, Pauldrons and Shields), or 270375 with Ancient Legendary bonus (38625 per piece).

The Globes are, as the name suggests, small globes of energy that can be used by the character to replenish his life. They cannot be carried in the inventory and are immediately used when the player runs over them.

Many items and passive abilities enhance Health Globes or make them award extra effects to the player, such as replenishment of primary resource (Reaper's Wraps). The pickup range can also be increased by many means. However, to pick the Globe, character must move: it will not be picked automatically even if dropped within pickup radius. Normal pickup range is the same as for Gold: 3 yards.

There is no competition over the Globes, as picking one applies it to all players within 40 yards, as well as their followers, summoned pets, minions and creatures.

The Globes have been named the successor of the Potion system in Diablo III. The older method of chugging Potions while fighting a powerful monster, effectively giving the player infinite health so long as they're never instantly killed, does not work in Diablo III.

Power Globes are a rare variant of the Health Globes, dropped less often, awarding no health, but instead applying one stack of Nephalem Glory buff.

Mana Globes were supposed to be blue-colored globes of energy that replenish the Mana of the character. They were mostly dropped by mana-oriented monsters like spell-casters and shamans. They have been removed from the game, most likely due to the fact that if the user was not a Witch Doctor, the globe would have been made worthless.

They were first seen in the demo build playable at Blizzcon 2008. They were partially implemented in the release in form of Power Stones created by Wizard skill Arcane Torrent with the respective rune. However, this rune was removed in Patch 2.1.

These only drop from Elite Monsters in Nephalem Rifts and Greater Rifts, always three or four per pack. Each globe fills up the Rift Guardian summoning counter by exactly 1% (so killing each Elite pack will effectively fill up 3-4% in addition to the award for the pack itself). They have no other effect, and may not substitute for Health Globes for any means.

Their purpose is to make killing elites in Nephalem Rifts and Greater Rifts more reliable in terms of progress rate. The only difference between the globes from normal and greater rifts is color.

Diablo III is built to emphasize skills and abilities rather than luck and faster hands. The health globes were introduced in order to foster a faster gameplay experience. It gives the player a reason to kill in order to survive. Blizzard Entertainment made the decision to feature the orbs as it was reasoned that potions could potentially give the player what essentially amounted to infinite health, necessitating, for the player to at all feel threatened, monsters that could remove all of that health in a single blow, which limits the number of viable strategic options and gameplay styles. Orbs could allow for less invulnerable and powerful monsters and more strategic gameplay when it came to fighting them.[1]

The Globes were initially met with stiff resistance from the veteran gaming community. After much reasoning from Blizzard's side, the disgruntled members of the community eventually warmed up to the new idea.

The inclusion of Globes and the reduction of the Potion system has drawn mixed responses from the gaming community. Most oppose the latter of the two. While they feel that Globes make the game play out fast and more smoothly, the removal of unrestricted Potion use was a price they did not expect to pay.

Others saw the inclusion of Globes as making the game more childish, side-scroller type and more Zelda-ish, especially the news that some monsters would drop Globes at intermediate health states. It can be said that the Globes were as debatable as the controversy over the "cartoonish" art direction.

In Whimsyshire, Health Globes are replaced with cupcakes. Their effect is exactly the same.

During a Nephalem Rift with Infernal Bovine spawns, Health Globes are replaced with T-Bone steaks.

Prior to 2.1, the amount of health a globe can heal could be predicted by its size: the larger globe is, the higher percent of maximum health it would have replenished. However, as of 2.1, all Health Globes heal the same percentage of Life. 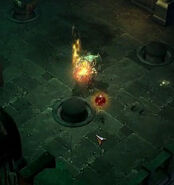 A Barbarian about to pick up a Health Globe 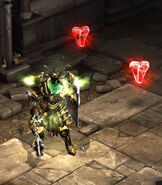