The Harvest, often referred to as Fallen Pennant, is a pennant added in patch 2.4.1 of Diablo III. Due to a bug, it did not drop until patch 2.4.2.

This pennant drops from Graw the Herald, a unique (and extremely rare) Fallen Shaman that has a chance to spawn in "The Lost Caravan" zone in Stinging Winds.

When obtained, it can be added to Wardrobe. Only one pennant can be used at a time. If equipped, it will be visible even in character selection screen.

This pennant smells of dead leaves. You should unfurl it.

The long cold winter begins, but your hard work during the harvest will keep you alive. Hopefully. 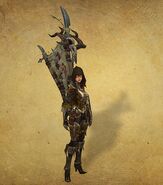 Retrieved from "https://diablo.fandom.com/wiki/Harvest?oldid=189606"
Community content is available under CC-BY-SA unless otherwise noted.