Start a Wiki
watch 02:57
The Loop (Games)
Do you like this video?
For the Diablo II weapon, see Grim Scythe.

Grim Scythe is a Primary Necromancer skill in Diablo III.

Grim Scythe summons a huge spectral scythe in a wide arc (roughly 160 degrees), dealing damage in front of the Necromancer and restoring Essence for each damaged enemy.

Note that Essence is only generated if Grim Scythe actually deals damage. 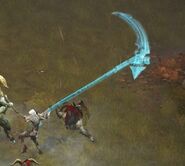 Grim Scythe as seen before it strikes