"I need more bodies! You think my summoners can just conjure up a demon whenever it pleases them? We must have blood — fresh blood, mind you — and human flesh to bolster our magic. I will be expecting a reply from you shortly."

The Grand Inquisitor, Master of Pain was a high-ranking member of the Coven. He demanded additional bodies for his Dark Summoners' demonic rituals and threatened his subordinates when there were no villagers left to be found. It became a moot point however, as he was cut down by the Nephalem.[1]

The Grand Inquisitor can be found as a Super Unique Zealot found in the Halls of Agony. He has Electrified, Extra Health and Frozen Pulse affixes. Upon seeing the Nephalem, he will yell:

He does not have to be killed to advance further in game, but most players choose to do so.

Two manuscripts by the Grand Inquisitor can be found— his command and his reply. 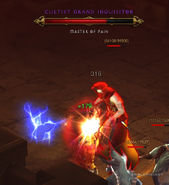 Retrieved from "https://diablo.fandom.com/wiki/Grand_Inquisitor?oldid=178979"
Community content is available under CC-BY-SA unless otherwise noted.