View source
watch 02:23
Wiki Targeted (Games)
Do you like this video?
Play Sound

Goatman Impalers (a.k.a. Goatman Slingers) are a new type of khazra enemy in Diablo III. They have a similar role to the Goatman Archers of Diablo I.

Impalers they attack from range, wielding javelins in the style of Lacuni Slingers.

There are three types (Moon Clan, Ice Clan and Blood Clan), but their differences are almost exclusively cosmetic (Blood Clan Impalers attack slightly faster). A typical ranged class, Goatman Impalers tend to stay on the back lines and support their comrades from afar. However, their spears fly slower than arrows, making them easier to dodge. 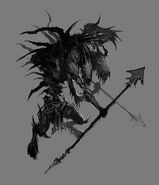 Khazra appear in the Battlefield of Eternity map in Heroes of the Storm, taking the place of siege giants.[1] Their appearance is of Moon Clan Impalers.[2]