On Torment difficulty, Ghom has a soft enrage timer of 4 minutes. Once the time is up, he no longer has a cooldown on his Gas cloud, and existing clouds no longer despawn. However, for an adequately geared player, most of the room (if not the entire room) will be filled with gas long before that timer expires, so positioning and slow retreating from Ghom is advised if defenses are not up to par. However, since his damage does not increase, it is still possible to kill him after the enrage.[1]

"Lord of Gluttony" is a title Ghom lives up to. Ghom's hunger is his signature weapon. He has four mouths: one (largest) on his torso, two that act as a pair of spaulders and, apparently, one more under his helmet. Whenever he speaks, flatulences and licking of lips are heard. He attacks with a rather foul smelling gas, a putrid vomit attack and a bone crushing snap bite, but according to Deckard Cain, he also uses his bile and 'other substances' in combat. Ghom is also very sadistic, even for a demon, as he prefers eating his victims alive, tearing the flesh from their bones very slowly, and likes humans to be served to him purposefully overfed ('stuffed', as Ghom himself calls it) with the fresh meat of their dead comrades.[1] 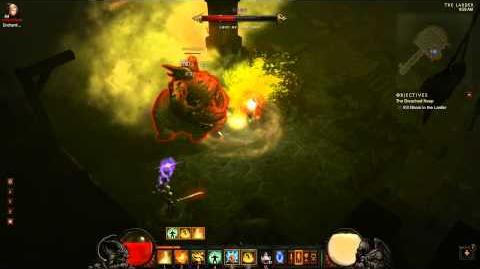 Retrieved from "https://diablo.fandom.com/wiki/Ghom?oldid=123184"
Community content is available under CC-BY-SA unless otherwise noted.