Gharbad the Weak is a quest in the original Diablo. It includes a series of interactions with the Flesh Clan Goatman of the same name.

Gharbad the Weak is located on dungeon level four. At first, he will beg for mercy, promising to make something special for the hero if his life is spared. When the hero returns after leaving a sufficient distance (approximately 1 screen length away from Gharbad, this is not time-dependent), Gharbad will give the hero a magic item as proof that Gharbad will keep his end of the bargain. When the above condition is replicated, he will tell the hero that he is almost done creating the promised item. Finally, on the fourth visit, Gharbad will attack, claiming the item he made is too good for the hero to use. Defeating him will yield another magic item, and the completion of this quest. Probability seems to be exceptionally high that his 2nd drop (upon death) is a mace-type item (running the gamut from club to maul).

"Pleease, no hurt, no kill. Keep alive and next time good bring to you."

"Something for you I am making. Again, not kill Gharbad, live and give good.

You take this as proof I keep word..."

"Nothing yet! Almost done.

No pain and promise I keep!"

"This too good for you. Very powerful! You want - you take!"

This quest returns in The Darkening of Tristram, though somewhat simplified. Gharbad will simply appear on Level 4 (in every game) as a Unique Khazra Brute, and immediately become hostile.

Upon death, he always drops King's Sword of Haste, Godly Plate of the Whale or Archangel's Staff of the Apocalypse. 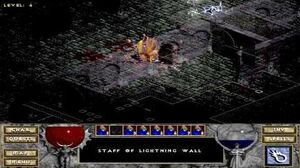