Frailty is a Necromancer Curse skill in Diablo III.

An enemy that goes below 15% of maximum Life while under this curse, or is afflicted when below that threshold, dies outright. Elites are affected too, and even Bosses are killed outright when below 15%. A small runic circle will appear on the ground to indicate that an enemy was killed by the curse.

Effectively, this curse reduces the total damage required to kill afflicted foes by 15%. 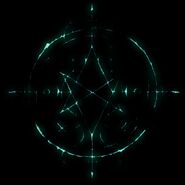