Exploding Palm is a Technique Monk skill in Diablo III.

When used, strikes one enemy within melee range, causing them to Bleed. The target is marked with a glowing Palm symbol above their head. Can have multiple targets under this effect at a time, but applying Exploding Palm again to the same enemy by the same Monk will only renew its duration. Multiple Monks may apply Exploding Palms independently to the same target if needed.

If the target dies while still under the Exploding Palm Bleed effect (no matter the cause of death), they will explode in a rain of blood, dealing high Physical damage to all enemies within 6 yards of itself. The target's corpse, obviously, is destroyed. A monster whose corpse normally explodes after death will explode twice (normal explosion and eruption of blood), whatever way that may sound. At the moment of explosion, a pulsing heart will appear above the victim.

Originally, this skill was dealing damage equal to 50% of the victim's maximum Life with on-death explosion. There was no limit on how great this damage could be (in theory, it could kill or at least severely damage a Rare Monster's minions when their leader died). For balancing purposes, this was changed to a weapon damage percentage amount in patch 2.1.

The Monk attacks with an Exploding Palm, while enemies blow up behind him.

Note the floating symbols above the Dark Cultists afflicted. 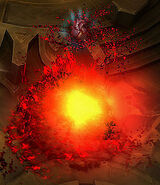 An explosion of blood