Diablo II: Resurrected is a remake of Diablo II.

Resurrected is a remaster of both Diablo II and Diablo II: Lord of Destruction. The graphics have been updated,[1] moving from 2D sprites to 3D assets,[2] but can be toggled between the remastered version, and the original graphics via the press of a button.[1] A zoom camera has been added, and all of the original game's cinematics will be remastered,[2] though the audio will be retained from the original game (albeit upscaled).[3] The game supports resolutions up to 4K. The soundtrack has likewise been updated, with support for Dolby 7.1.[4] It is a digital-only release.[5]

The gameplay from the original has been retained,[1] though now runs at 60FPS.[2] There is planned support for cross-progression,[1] though cross-play will not be available.[3] The game can be played both on and offline. A shared stash system has been added to the game. However, ladder characters can't exchange items with a non-ladder character, nor can online and offline characters share items. An auto-gold system has been added, where players can opt-in. Another addition is an item-comparison system, where players can compare the stats of their items, by (in the PC version) holding the shift key. However, the game does not provide a recommendation as to what item to use.[2]

The developers are considering shortening ladder seasons for the game.[2]

The PC version is compatible with controllers.[2]

By BlizzCon 2018, Blizzard knew that they were making Resurrected.[6] Development began in 2020, after the release of Warcraft III: Reforged. Team 1 was assigned to the project. Reportedly, members of the team wanted to avoid the mistakes that had led to the poor reception to Reforged. However, in that year, a postmortem concerning Reforged was carried out. Team 1 was removed from the project, and development was placed in the hands of Team 3 and Vicarious Visions.[7]

When Team 3 started working on the game, they decided to keep all the gameplay aspects of the original game, as well as retaining the original storytelling.[8]

Some source files from the original game were recovered. Game designer Andre Abrahamiam was able to track down assets by going to various individuals within Blizzard, who'd kept the assets in "folders within folders." Months were spent organizing the assets. Blizzard North concept art was also retrieved.[2]

The game was revealed to the public at BlizzConline in February, 2021.[4]

The developers initially considered couch co-op for console versions, in a similar manner to Diablo III. However, due to the way the game is structured, with the character always remaining at the center of the screen, it "didn't feel like D2 anymore."[3]

Pre-ordering the game allowed players access to the open beta, and a Barbarian-themed transmog for Diablo III.[10] A beta was held from August 13 for those who pre-ordered the game, and an open beta from August 20 to August 23. The Druid, Paladin, Sorceress, Barbarian, and Amazon were playable. For Xbox players, Xbox Live Gold was required to partake in the beta. It was not held on Nintendo Switch. The beta covered the first two acts, and progress is not carried over to the full release of the game.[5]

Team 3 worked on the principle of 70:30 when remastering the game's appearance. The 70 refers to what's untouched from the original, while the 30 refers to "elevated" artwork. A new renderer was developed to make the transition from 2D sprites to 3D models.

Source files from Diablo I were used for reference in some cases when designing the new models.

The Prime Evil Collection is a special edition of Resurrected. In addition to Resurrected, it grants players the following:

A number of 'cover images' were released via promotional material, showing the three Prime Evils and the Dark Wanderer: 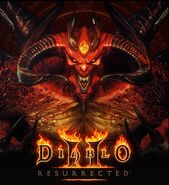 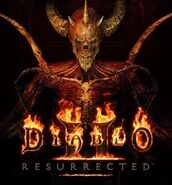 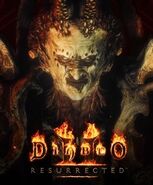