This final quest in the original Diablo involves the Dark Lord of Terror himself. This quest is initiated by Deckard Cain anytime after killing Archbishop Lazarus. The pentagram symbol on the fifteenth level of the dungeon turns into a portal to the sixteenth level, the lair of Diablo himself.

It is filled with Advocates and Blood Knights, including the unique knight Sir Gorash. There are four corner rooms, only one of which is accessible at first. Pulling the skull lever in that room opens the second, and pulling the lever in the second room opens the third. The third room has two skull levers and both must be pulled to open the fourth and final room.

In this room, there is a pentagram on the floor, and it is heavily guarded. A row of Blood Knights forms the outer defense with Advocates behind them. In the very center of the room is an enemy denoted as "The Dark Lord", which is Diablo himself. Surprisingly, he is not a unique monster. He uses the mighty Apocalypse spell, and cannot be Stone Cursed. Defeating him completes the quest, and the game ends in victory.

"Your story is quite grim, my friend. Lazarus will surely burn in Hell for his horrific deed. The boy that you describe is NOT our Prince, but I believe that Albrecht may yet be in danger. The symbol of power that you speak of must be a portal in the very heart of the Labyrinth.

Know this, my friend - the Evil that you move against is the Dark Lord of Terror. He is known to mortal men as Diablo. It was he who was imprisoned within the labyrinth many centuries ago and I fear that he seeks to once again sow chaos in the Realm of Mankind. You must venture through the portal and destroy Diablo before it is too late!"

This quest is one of the four Diablo quests to appear in Multiplayer mode. Like in Single Player, it is triggered by Deckard Cain after Archbishop Lazarus is killed, but this time, level 16 is much larger. The four rooms are still in the same place, however, and Diablo still has his Blood Knights and Advocates as personal defenders.

The Multiplayer game will boot all players on Diablo's level upon his death, treating them to the ending cutscene. Subsequent visits to Diablo's level will not result in booting players. This, given with the fact that players drop nothing upon dying on this level, can make lv. 16 a 'poor man's' PvP site.

This quest returns in The Darkening of Tristram virtually without any changes, except for that levers and rooms are located one after another, so there is no bypassing them or guessing where the boss might be.

Killing Diablo (The Dark Lord) will play the cutscene from the original game (Warrior's for male characters and Rogue's for female) and reward Red Soul Shard. 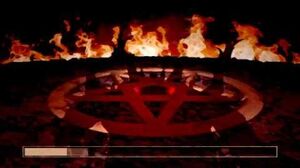