Diablo is the final boss of Act IV of Diablo II.

Diablo appears in his Chaos Sanctuary after all five seals have been opened. Note that three of those seals contain a Unique boss with a pack of minions; those have to be defeated as well. In one of the left-hand seals, the Unique boss Grand Vizier of Chaos (Finger Mage) is hidden, in the upper seal lurks Lord De Seis (Oblivion Knight) and on the right-hand side awaits the Infector of Souls (Megademon). When all seals have been opened and all bosses and minions defeated (note that if the last seal you open is a seal containing a miniboss, killing the 'leader of the pack' will also destroy his minions) the Chaos Sanctuary should suddenly start 'brightening up'. After that, a violent tremor quakes through the Sanctuary, killing any monsters left in the Sanctuary, and a demonic voice can be heard saying: "Not even Death can save you from me!". Diablo awaits near the inner seal...

Diablo has a range of powerful spells and abilities, of which, many are Fire-based, such as Flame Circle, Fire Wall and Firestorm, so having full Fire Resistance and some Fire Absorb will help greatly. At the start of the boss fight, diablo will use a fire circle. Diablo also has a nasty Cold Touch ability (as can be seen in the animation above) that slows players down, which can be ignored by having an item with the "Cannot be Frozen" ability. His most feared attack in normal difficulty is his Red Lightning Hose attack, which deals massive damage. The damage done by this attack is partly Lightning based; the other part is Physical Damage. Maximum Lightning Resistance and Damage Reduction (for players using shields: a high Block rate helps) might allow you to survive this attack, but it's wise just to run away when you see Diablo preparing to cast it. In later difficulty levels, however, the damage from this attack originates from a distance where melee characters will not take damage from the attack unless they choose to move out of melee range. Diablo also charges at players who are out of his melee range. His melee damage is also considerable – yet another reason to bring some Damage reduction with you.

It is recommended to at least max out Fire Resistance and, if possible, Lightning Resistance as well. That is, achieve 75% resistance in either field (or up to 95% in each, with the appropriate gear). Ranged attackers have fewer problems evading the Fire and Lightning Hose spells, but have to make sure they don't get charged by Diablo. Melee attackers will just have to endure Diablo's melee hits: this is a Healing Potion-intensive fight. Keep hitting the Lord of Terror as much as possible; with full Fire Resistance and possibly Fire Absorption, the player should be able to survive the Firestorm and Fire Nova spells with relative ease. Only run away from the Red Lightning Hose spell; it deals significant damage and will kill quickly if the player does not move away in time. It is also important to fight Diablo at a place where there is enough space to run away.

When dodging the Lightning Hose attack, run around Diablo rather than away from him. Diablo turns slowly while casting the spell, making it quite easy to outrun it. Diablo uses the spell in rapid succession, however (most often three times in a row), so be prepared to run in the opposite direction as soon as the previous Lightning Hose spell ends. This also calls for high stamina or stamina potions, as the player's stamina may run out after doing this a few times, and it is almost impossible to evade the Red Lightning Hose spell while walking. Just before Diablo starts casting his Lightning Hose attack, he raises both his hands into the air, which is different from any of his other skills or attacks: this gives some time, though less than one second, to react before it hits. A combination of his Cold Touch followed up with the Lightning Hose is very deadly and extremely difficult to evade.

You most likely have to retreat to the Pandemonium Fortress a few times to refill the supply of Healing Potions. Opening a Town Portal should be done out of sight where Diablo cannot reach you, as he tends to cast Bone Prison around Town Portals. Diablo has several seconds to kill the player defenseless in the Prison. Interestingly, Diablo's AI does not allow him to leave the large central area of the Chaos Sanctuary, and thus he will not follow you if you go down any of its four halls. This makes the seal areas and the entrance fully safe for town portals and also for refilling potions to the belt during the fight.

Keep battering the Lord of Terror until he finally falls. Watch a spectacular death animation, grab the loot and head back to the Pandemonium Fortress before you either continue to Harrogath or sit back to enjoy the Epilogue.

In the Lord of Destruction expansion and the classic version, there exists a more powerful version of Diablo called Über Diablo. He is most likely added to the game since, despite his name being the title, he isn't the final boss of the expansion or classic. There is no plot explanation for his existence but is speculated to have been created to curb the excessive amount of Stones of Jordan that people managed to duplicate by various exploits on Battle.net's servers. He serves as a super boss enemy, in the sense that fighting him is optional, and he is stronger than Baal.

Über Diablo can only be fought on Hell difficulty, and only on the Battle.Net Realms (not the Open Realms). You get to choose the place to battle him, as when he is able to spawn, he replaces the first super-unique monster you face. For example: When you summon him (although that is a bad way to describe how he spawns), you can go to The Den of Evil to fight Corpsefire, but instead, you will battle Über Diablo. Upon death he drops a unique small charm called Annihilus, this charm only drops in the expansion. If the Über Diablo dies in non-expansion he will drop nothing.

The Experience you gain killing the Über Diablo is less than from "normal" Diablo, due to the fact his monster level is set at 110, and the non-Über version is set at 85 for Hell Difficulty.

As stated before, Über Diablo is a much stronger version of Diablo. He possesses all of Diablo's attacks, and can also cast Armageddon as well. Although he's the strongest enemy in the game outside the three bosses of Über Tristram, he has all of the same attacks, and preparations for fighting him are overall the same as Diablo, requiring a high amount of fire and lightning protection.

After about thirty seconds of combat, he will regenerate his health at an incredible rate, and if the damage is not high enough, he will heal completely. Luckily, an item with "prevent monster heal" will prevent this as will the eight seconds from a successful Open Wounds attack.

The Pandemonium Diablo is featured as a part of the Pandemonium Event, the ultimate challenge of Diablo II. It is the strongest version of this boss and is accompanied by powered-up versions of his brothers, Uber Baal and Uber Mephisto. The battle itself take place in "Uber Tristram", and in order to get there, players have to collect keys from the weaker, but powerful bosses Uber Duriel, Uber Izual, and Lilith, all of which require their own keys to be accessed. 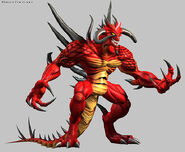 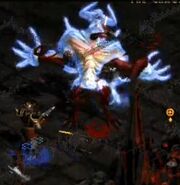 Retrieved from "https://diablo.fandom.com/wiki/Diablo_(Diablo_II)?oldid=192285"
Community content is available under CC-BY-SA unless otherwise noted.