"There is a place of great evil in the wilderness."

The Den of Evil is the first quest that the player is offered upon creating a new game in Diablo II, and can be activated by talking to Akara in the Rogue Encampment. Akara will tell the player of a cave filled with demons that may possibly attack the camp, and requests that they be destroyed.

The Den of Evil is located in the Blood Moor, just outside of the Rogue Encampment. The cave is noticeably dark and is home to Fallen, Fallen Shaman, Zombies, and Gargantuan Beasts. A Super Unique Zombie named Corpsefire is also located in the cave, usually at the end opposite of the entrance.

Nearing the end of the quest, the quest will update itself with how many monsters are left within the Den. Once all monsters have been cleared, the Den will be flooded with light, and the player will be able to claim his or her reward from Akara. Along with earning her trust, the player receives one free Skill Point. After patch 1.13, she will also give the option to reset all skill and attribute points, once per difficulty.

Completing this quest prompts Kashya to activate the next quest in Act I, Blood Raven. 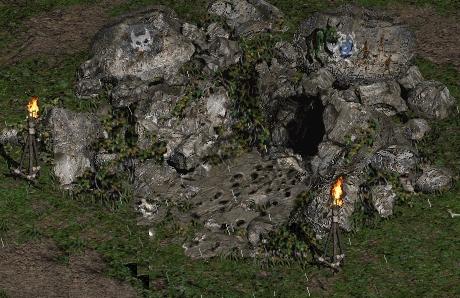 Quest icon
Add a photo to this gallery

"There is a place of great evil in the wilderness. Kashya's Rogue scouts have informed me that a cave nearby is filled with shadowy creatures and horrors from beyond the grave. I fear that these creatures are massing for an attack against our encampment. If you are sincere about helping us, find the dark labyrinth and destroy the foul beasts. May the Great Eye watch over you."

"I should add that many Rogue scouts have died in that horrible place. We cannot afford to lose any more. If you choose to enter that Den of Evil, you must do so alone."

"The beasts from the cave have begun to roam throughout the countryside. You'd better be careful out there."

"You're a brave soul! I'd sooner thrust my sacred scepter into the foulest, carbuncular trull than set one boot into that cave."

"The demons in that cave have claimed many of my finest archers. I wonder how you will fare!"

"One who seeks that cave, seeks death."

"Your task is not complete until you have killed all the demons in that cave."

"You haven't cleared the cave, yet? Do you need anything?"

"Demons still befouling that cave, huh? I think you might need a new weapon."

"You'd better come through on this. Your reputation depends on it."

"One who hesitates ... does so with good reason."

"You have cleansed the Den of Evil. You've earned my trust and may yet restore my faith in humanity. Your reward is training in the skill of your choice."

"You are truly brave and skillful ... Akara was worried about you."

"The only good demon is a dead one, I say. By the way, did you happen to find anything in that cave you'd like to sell?"

"Hmm. I'm surprised you survived that test, outlander. Go see Akara. She may reward you."

"...That which does not kill you makes you stronger."

"I hear foul creatures about."

"There are many foes here."

"So this is what the Moor hides."

"I sense death within this place."

"Evil dwells within this cave."

"This place is trouble."

"Perhaps now the Sisters will trust me."

"The Rogues' test is done."

"The Rogues are safe, for the moment."

"Is that enough to earn the Rogues' trust?"

"This cave has been purged of evil."

This early in the game, the player's defenses are low and life is also low, so it is better to be prepared. Remember to attack Shamans first before attacking their minions, as they can resurrect Fallen Ones.

It is important to keep in mind that every monster in the Den must be slain for this quest to be completed, so make sure to be meticulous in the slaughter. Fallen Ones will often run and hide in corners, making finishing this quest somewhat troublesome.

Like many quests in Diablo II, the Den of Evil can be skipped entirely, as it is not necessary to finish the game. However, it is relatively safe, and its reward of one skill point is very valuable, so it is highly recommended.

After killing most of the creatures and having the quest notice pop up stating how many monsters are left in the den, if a shaman is left alive and resurrects more than five fallen, the quest counter will instead read "Monsters Left: 666".

Retrieved from "https://diablo.fandom.com/wiki/Den_of_Evil?oldid=184240"
Community content is available under CC-BY-SA unless otherwise noted.