Take this Diablo II: Resurrected quiz to find out which class you align with.

View source
watch 02:19
Wiki Targeted (Games)
Do you like this video?
Play Sound

"One usually hears Demonic Tremors before seeing them. These behemoths move slowly and heavily, pounding the earth with their massive fists. Many a siege has been broken by the tremors' battering strikes, and many more enemies of the demons have been felled by their wrath. I pray that our world will never see them again."
—Deckard Cain

Demonic Tremors are large demons. A number of them under Azmodan's army laid siege to Bastion's Keep.

Tremors first appear in Act III of Diablo III. Later, some of them may be encountered in Act IV, mostly in Hell Rifts.

They are large and easy to spot, but once engaged, can prove to be deadly in combat. Their attacks are slow and hit hard (often knocking victim back), and in addition to large Life pool, they can enter a 'block' state (indicated by Tremors being covered with a translucent sphere). In this stance, which usually lasts 5 seconds, they cannot move or attack, but are 95% resistant to all damage, making you seek other targets. Once the Demonic Tremor ends his block state, it will enrage, gaining increased attack speed, movement speed and damage. This effect duration depends on how much damage the demon sustained while blocking.

Tremors are immune to Knockback, and in addition, are the only type of enemies that can destroy doors, barricades and other obstacles, should those be in their path or should they prove to be physically unable to fit in. There is even an achievement for leading one Tremor through five doors as it bashes its way through each door.

On the early stages of development, Tremors were known as Brickhouses.[1] 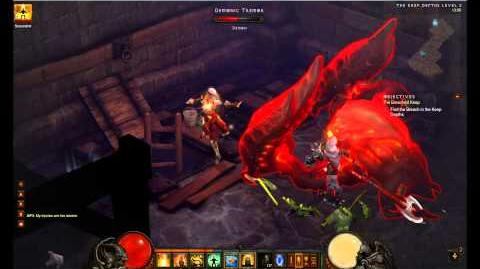