"My family was butchered by hellspawn. To witness such a thing is enough to leave your mind in ruins. The madness killed my sister, and left me frightened and alone. Until I was rescued. Rescued by survivors, who had joined together to rid the world of the creatures of Hell. They saw in me the strength to resist the demons. And they forged me into a weapon. Now, I am ready. A meteor has fallen in Tristram, and the dead have risen in its wake. I will send them back to their graves. Once, I was hunted. Now...I am the hunter."

The Demon Hunter is a playable class in Diablo III.

The Demon Hunter is based around ranged combat.

The Demon Hunter was revealed at Blizzcon in 2010. The Demon Hunter was introduced as a character built around ranged combat. They can dual-wield crossbows, launch explosives, place traps, and cast shadow magic (which complements their dark nature). Due to these capabilities, this class is apparently a combination of both the Amazon and Assassin classes from Diablo II. Blizzard made the Demon Hunter darker than the other classes as they wanted a character that would have a different feel from the others.

Demon Hunters mostly use Physical damage, with a portion of Fire skills, but can tune their skills to deal Lightning or Cold damage. Some, very few, runes were originally dealing Poison damage as well, but were changed to Cold after patch 2.1.2.

Unlike the other classes, the Demon Hunter uses two resources – the fast-regenerating Hatred (used for offensive skills) and the slow-regenerating Discipline (used for tactical skills and evasion). The class resource orb is divided in two halves accordingly – the left half (red) represents Hatred and the right half (blue) represents Discipline. Demon Hunters are very poor at absorbing damage, but have the largest assortment of skills that allow evading it altogether. In group, they deal very high damage from considerable range, supporting their allies by Slowing, Immobilizing and Stunning enemies.

There are six Demon Hunter class sets in game:

The Demon Hunter's split resources can be a double edged sword however. Exhausting all of one does not leave them completely helpless, but locks them out of half of their skillset, greatly reducing their capabilities. Learning to balance the two resources effectively is a key pillar of mastering the Demon Hunter.

The Demon Hunter's Active Skillset is divided into six sub-categories: Primary Attacks, Secondary Attacks, Defensive Maneuvers, Hunting Skills, Devices, and Archery Skills. Many of these require a ranged weapon to be equipped. Rockets are a special mechanics of the Demon Hunter skills, providing independent fire support when necessary.

"For the demon hunter, sexy was a word that we focused on."

The Demon Hunter was the last class developed for Diablo III's base game, and it was intended that the class reflect the series's dark themes.[2] The developers always knew that the game's fifth class would be a ranged one. The earliest designs depicted a woodland hunter, but the character was deemed to lack an edge. Revisions showing him with a pair of swords were popular, but this drifted away from the class's original intent. A desert ranger class was also explored,[3] but the designers ran into artistic problems—his cloth clothing made him look too bulky, and as more gear was added, the problem only got worse.[4] Thus, it was decided to reboot the class's development.

In the revised concept, the hero was designed to have a gothic feel. The designers wanted the class to have a unique insight into the coming demonic invasion, and began exploring how the class might wield demonic artifacts and runes against his foes. With this "hunter of demons" taking shape, the demon hunter class was thus settled upon.[3] The idea was pitched to make the Demon Hunter half-demon. However, the idea was not followed up. Jay Wilson saw the character as "more Batman than Blade," and the presence of demonic limbs made the Demon Hunter look like a melee-based class.[2]

Physically, the class was meant to be quick and agile. The legs and body were free moving, while a cape was added to symbolize the enigmatic nature of the demon hunters.[3] Further inspiration was taken from characters such as Boba Fett, Van Helsing, and even MacGyver.[5] An early idea for the class was to have the Demon Hunter stand on the shoulders of the Barbarian, shooting from atop him/her.[6] 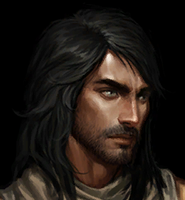 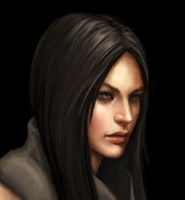 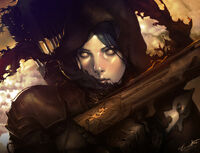 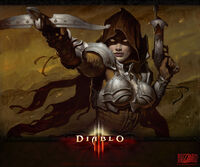