Start a Wiki
watch 01:51
The Loop (Games)
Do you like this video?
For the Diablo II enemy, see Claw Viper.

"These serpentine demons are Belial's favored servants, and he has granted them some of his skill in cunning and illusion. Deceivers will cloak themselves in the familiar forms of their enemy's companions and friends, waiting to strike when the moment is opportune. It is only then that their true forms are revealed."

Deceivers (a.k.a. Veiled Demons, Doom Vipers, or Snake Demons) are demonic enemies encountered in Act II of Diablo III. They are Belial's personal guard, agents and the bulk of his army.

In Adventure Mode, their weaker variants called Abyssals can be encountered.

There are two types of Deceivers in Diablo III:

Like Belial himself, Deceivers are capable of taking any form, disguising themselves as humans. The player first encounters them when they enter the Khasim Outpost, where a bunch of Deceivers led by Maghda are impersonating the Iron Wolves and the Imperial Guard. As soon as their deception is disclosed, they transform back into their original forms, and are to be fought. Later in game, most Deceivers will either attack the player openly or throw their disguise of Imperial Guardsmen (whose ranks, most likely, consist entirely of Belial's demons), or sometimes regular citizens, at the sight of the player.

In addition to that, Deceivers may appear out of nowhere (for scripted events), and their most dangerous skill is invisibility. When they are away from player (not in close combat), they may vanish, becoming invisible (only slight ripple in the air betrays their location) for roughly 3 seconds. In this form, they are impervious to damage, and the first melee hit they deliver will deal double damage, ending the effect. Being ninja-stabbed by multiple Deceivers can prove deadly for an average hero. Fortunately, while they are locked in close combat, they cannot enter invisibility again.

Serpent Magi are lacking melee attack (technically they can use it, but will not do so willingly), and may not turn invisible (but may appear out of nowhere or take forms of humans). In return, they create a circular Lightning field around themselves (must stay immobile to channel it) that causes increasing ticks of Lightning damage. Several fields in one area stack. Their goal is to make players flee so that Deceivers may enter invisibility again. 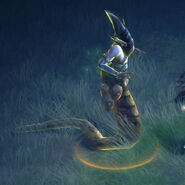 Book of Adria artwork
Add a photo to this gallery
Retrieved from "https://diablo.fandom.com/wiki/Deceiver?oldid=179734"
Community content is available under CC-BY-SA unless otherwise noted.