"The cultists were performing a strange ritual when I saw them, today. One of their number stood soundlessly while others thrust long spikes deep into his spine. He did not perish, and I believe that he may have even been darkly empowered from the implantation, though such terrible magic is foreign to me."

Dark Vessels (Triune Vessels in early concepts) are cultists of the Coven, specifically trained to summon demons and immediately become possessed by them. However, as the resulting mindless construct of flesh and bone is highly unstable, they must start the process in combat, giving enemy time to kill the cultist before the ritual is complete.

Dark Vessels look much like Dark Cultists, but Vessels wear hoods and lean on tall crooks, remaining still in one place and ringing the bells on top of their crooks, while chanting demonic verses until they transform.

Dark Vessels are commonly found standing motionless, amidst various other types of Dark Coven servants. Vessels are harmless in their human form, but become very dangerous melee fighters if they manage to pull a demonic entity into themselves, which takes them roughly 6 seconds once combat starts, and they do not need to be hit for that to happen. In that form they are known as Dark Thralls, and are ferocious melee fighters. Note that elite Dark Vessels do not transform: you encounter them in form of the Dark Thralls already. Despite being immobile, all Dark Vessels can still be knocked back.

Dark Vessels are found in the first act of Diablo III, specifically in Leoric's Manor, the Highlands Cave, and the Halls of Agony. In Act II, they are only found in Alcarnus, and are not encountered later in game.

Note a distinctive hood and staff. 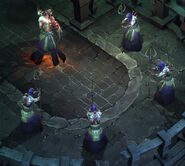 Dark Vessels chanting, one already being able to transform into an Activated Vessel. Notice the spikes in their backs

Original artwork, later used for Dark Cultists
Add a photo to this gallery
Retrieved from "https://diablo.fandom.com/wiki/Dark_Vessel?oldid=177396"
Community content is available under CC-BY-SA unless otherwise noted.