The oasis apparently existed before the Mage Clan Wars, over 1500 years prior to the End of Days. According to Eirena, the oasis of this era was much larger than the current version.[1]

According to Abd al-Hazir, in the tenth century, Caldeum depended on small wells for its water. Then came the mysterious Dahlgur, who offered Caldeum an oasis of unparalleled splendor located in an area previously thought to be desert, asking only that his name be permanently affixed to the land. Then, he vanished into the wastes.[2]

The oasis is visited in Act II of Diablo III. 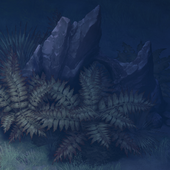 Somewhere in the Dahlgur Oasis, the unique Dune Dervish, Sokahr the Keywarden, can be found. Sokahr drops the Key of Hate (Key of Gluttony), necessary for the Infernal Machine event.

If trying to get to this area to try and get the Mysterious Cave for the Whimsyshire item, the best quest to start from is Betrayer of the Horadrim: The Forgotten Ruins as it places you right smack dab in the middle of the Dahlgur Oasis.