"Though Azmodan is close to all of his lieutenants, Cydaea is his special favourite. The Maiden of Lust is both beautiful and grotesque in appearance, with the torso of a woman and the legs of a spider. Her voice is said to be as smooth as honey, but she only speaks words of death."

Maiden of Lust
Mistress of Pain
Consort of Azmodan

Cydaea, the Maiden of Lust was a powerful demon, and a favorite lieutenant and concubine of Azmodan. She is also a member of the Sin Lieutenants.

Cydaea was a consort of the Lord of Sin himself and one of his dreaded sin lieutenants. She also held dominion over a flock of Succubi, calling them her "daughters". When Azmodan launched his assault on Bastion's Keep, Cydaea remained behind. However, when a band of heroes led by Tyrael thwarted the demonic incursion, Azmodan called upon his consort to defend the vile Sin Hearts that powered his legions from within Arreat Crater. However, like many other minions of Sin, Cydaea proved unable to stop the heroes. She was slain in the depths of Arreat Crater, along with the sin hearts she had defended to her last breath.[1]

Cydaea appears as a minor boss in the Arreat Crater of Act III in Diablo III, appearing when the Nephalem destroys the Siegebreaker Assault Beast and proceeds to make progress towards the Heart of Sin. Cydaea will taunt the heroes seductively during their journey through the crater, dangling from a string of silk. Players will also encounter mind-controlled guards of Bastion's Keep who will say that Cydaea lured them with false promises and was preparing them to be sacrificed.

The player fights her twice, both times when a Sin Heart is within heroes' reach. Both battles take place at a C-shaped arena, starting as soon as player approaches the Heart. The first battle is more like a gear-check, as she retreats immediately after receiving 50% damage, leaving the matter to her daughters and ghoul thralls.

The second and final battle at the Heart of the Cursed is more complicated. Cydaea is the fastest boss in game, and often runs away from the player, forcing them to fight her spiderlings instead. She uses the following abilities:

On Torment difficulty, she has a semi-hard 4 minute enrage timer. Once it expires, she loses a cooldown of her Spiderling Pit and Net Toss abilities, overwhelming the players with the endless swarm of minions if not killed quickly. As her own damage does not grow, however, she can still be defeated even on adequate difficulty.[1]

Note: Due to mechanics of her fight, it is actually the easiest boss in game for builds that rely on gaining power from killing blows (Archon, Grave Injustice, Dominance, Rampage etc.).

The Binder is the Rift Guardian variant of Cydaea. 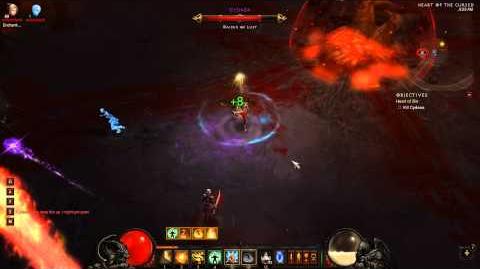 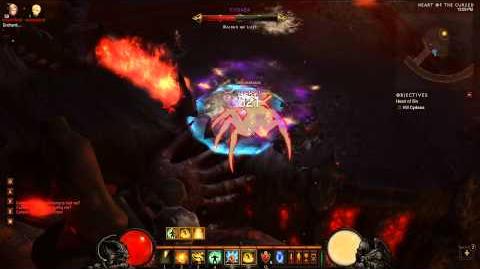 Retrieved from "https://diablo.fandom.com/wiki/Cydaea?oldid=168208"
Community content is available under CC-BY-SA unless otherwise noted.