"At twelve, I swore the oath, leaving home and family. At sixteen, I saw my master die. I took up his shield and his name, and on that day, I became a crusader; armored by faith, driven by duty, bound to kill the enemies of Zakarum. Sworn to live as a crusader, and to die as one. Now, corruption returns to the hearts of men. I see it in the eyes of the mad, hear it in the howling of the damned. A falling star in the west leads me to the town of New Tristram. The crusade calls me, so I go."

The Crusader is a class for Diablo III that was introduced in the expansion Reaper of Souls.[1]

Crusaders are unbending champions of faith and law. These living fortresses use impenetrable plate and towering shields to wade through scores of foes, leaving demonic bodies smoldering in their wake.

The thick of battle is unforgiving, but crusaders rush in without hesitation, relying on holy magic and heavy armor to guarantee victory. Well-trained crusaders are adept at deflecting attacks entirely, often shrugging off massive blows that would fell lesser combatants. If pressed, they can sacrifice speed and mobility for pure staying power.

Bone-crunching flails and wicked shields are perfect for melee, but crusaders are hardly limited to extinguishing evil at close range. When one of these divinely empowered warriors joins battle, blazing fire and blinding light follow, smiting entire packs of enemies who dare to resist judgment.[2]

"Do not hesitate to strike down your enemies. Death is their salvation from evil."

The Crusader is a mid-range hybrid caster/melee class[3] wielding a flail/[4]sword[5] and a shield. The class is based on the Paladin from Diablo II.[4] The Crusader has mid-ranged spells at his/her disposal.[5] The Crusader uses Wrath as his/her energy resource,[6] and uses battle magic to strengthen allies and weaken foes.[7] Crusaders are the only class with a passive skill, Heavenly Strength, that allows them to equip Two-Handed weapons with Shields.

With skills that force attackers to focus on them while punishing them for doing so and mitigating or eliminating the incoming damage, the Crusader is the definitive tank class. He/she is better suited to simply standing there and soaking up dangerous boss attacks than any other class, and can enable other players to waste less time running away instead of doing damage. Crusaders are also incredibly proficient with Shields, in fact being the only class to use those as a real tool of protection, many skills increasing the potency of Blocks. Moreover, being masters of retribution, Crusaders are the only class that can make Thorns truly shine, turning the mediocre reflection of damage into a powerful offensive weapon.

Although it was not initially put in place, a patch has provided the Crusaders with a +30% built-in damage reduction, to help ease the dangerous nature of melee combat.

The Crusader's story is retroactively included in Diablo III — NPCs will question and interact with the Crusader as readily as other classes.[8]

The Crusader has a variety of skills. Most of them are used either in melee or at medium range, as opposed to Barbarians who are almost exclusively fighting in melee. Many of these skills also have potent Crowd Control effects, mostly Stun, Blind and Slow. The Crusaders focus on Physical and Holy Damage, but can use Fire or Lightning Damage as well, along with a few Cold runes prior to patch 2.4 (items with bonus Cold damage do not smart-drop for Crusaders).

Many of the Crusader skills require Shields to be equipped before these skills can be used.

Almost all Crusader skills are damage dealing, or can be enhanced to deal damage over area of effect, hitting more than one enemy with a single cast. This makes Crusaders especially effective against hordes of lesser enemies. While less potent than Monk's, some of the Crusader skills can heal them or allies. The defensive skills of the Crusader are resourceful as well: they can summon a mythical warhorse, encase themselves in holy armor, or even turn into mighty avatar of Akarat.

The most potent Crusader skills are notable for dealing damage independently, being usable even while the character is engaged in direct combat.

The Crusader never fights alone: Avatars of the Order always follow them, appearing at the time of need. They may form an invincible Phalanx, or even launch a long-range Bombardment with pinpoint accuracy.

Crusaders' arsenal also includes Laws skills, similar to Paladin's Auras or Monk's Mantras. All of these skills have an active and passive effect, and only one law skill can be used at a time.[9]

This section is a stub. You can help the Diablo Wiki to become more awesome by expanding it.

"The Crusader. Our knight in battle-scarred armor."

The concept of the Crusader existed during the development of Diablo III, prior to release. A scenario existed where Blizzard would either develop the Monk as a class and add the Crusader in an expansion, or vice versa. The Monk was ultimately chosen.[11]

The Crusader originally began life as a darker Paladin-type class.[12] Josh Mosqueira wanted it to be a 'dark' class, to balance out against Malthael.[13] However, the Crusader turned into something different over the course of development.[12] The Crusader thus differentiated from the Paladin, as the team wanted to broaden Sanctuary's lore. While the Crusader is melee orientated, it is intended to be different from the Barbarian and Monk classes.[13] Most, if not all Crusader lore was developed by Brian Kindregan.[14]

The core idea of the Crusader is to mix a Paladin with the war ethos of a Spartan, and a modern armored tank,[5] the idea coming from lead designer Kevin Martens.[8] The three core pillars of the Crusader design were deemed thus:

In the brainstorming phase for the Crusader, the development team was allowed to submit any kind of skill idea as long as the skill related to one of these 'pillars.' It was decided to do a 50/50 split for the Crusader's skills, half of them being melee based, the other half being ranged.[15]

When designing the Crusader, Blizzard Entertainment employed an art technique referred to as "shape language." Shape language is the overall simplification of the major elements down to basic geometric shapes. By using rectangular angles, artists emphasied the Crusader's heavy armored knight ethos. However, unlike the armor, the Crusader's clothes are designed to represent the fact that Crusaders are capable of using magic, and are not entirely based on melee gameplay. After some brainstorming, designers settled on four pillars of Crusader design—the body armor, the cloth element, the shield, and the flail.[16] The flail was chosen as heavily armored warriors are traditionally depicted as wielding a flail or mace. Maces generally lean towards a clergymen or clerical type of character, while the Crusader definitely leans more towards the martial side of things. Thus, the flail was chosen.[17]

Crusader animations ran into a hiccup in that the idle pose was deemed too rigid. The pose was altered to look more fluid and dynamic.[18] 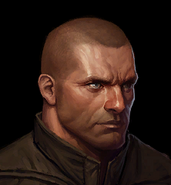 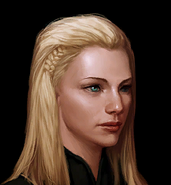 Female Crusader profile
Add a photo to this gallery 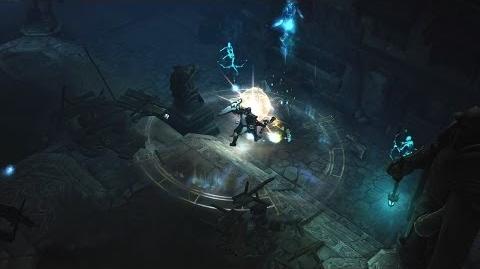 Retrieved from "https://diablo.fandom.com/wiki/Crusader_(Diablo_III)?oldid=181995"
Community content is available under CC-BY-SA unless otherwise noted.