Hits are sweeping: all enemies in a 160 degrees, 8 yards long cone are affected. The third hit is radial, hitting all enemies within 11 yards.

As with other Combo skills, to gain the combo hit, Monk does not need to hit the same target three times or even stand in one place: the hits just need to be done within a reasonable time. 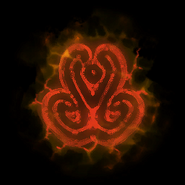