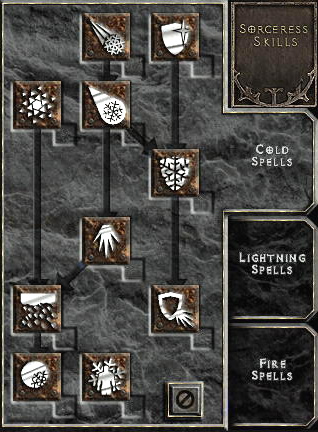 One of the Sorceress' three skill trees. Cold Spells is considered to be the weakest of the three trees in magic attack power, but offer other advantages in terms of slowing and even freezing your enemies.

The specialty of Cold Spells is, of course, to deal ice damage and, more importantly, slow and freeze your enemies. Some of the spells that prove to be quite useful in doing this is Ice Blast which can freeze whatever monster you hit and preventing them from ever even getting a chance to attack. Later you can get Glacial Spike which is an upgrade to Ice Blast. The bonus that Glacial Spike gets is that now you get splash damage and freezing capabilities. Later on, you can acquire Blizzard which deals massive damage & will slow or freeze anything over a fairly large area. Finally, you can get Frozen Orb. Not only is this spell awesome looking, it deals massive damage to anyone if you know how to use it right, and it will hit just about anything and everything in the screen.

In this skill tree you also get 3 powerful defensive spells, in the form of Frozen Armor, Shiver Armor, and Chilling Armor. These spells increase your defenses and give an added bonus against melee and/or ranged attackers.