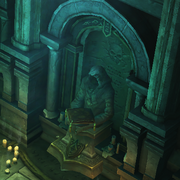 The Chancellor's Tomb is a location in Act I of Diablo III, in which the players visits during the quest The Shattered Crown.

It is the tomb of Chancellor Eamon, King Leoric's former chancellor. After Leoric's betrayal, Eamon locked himself in his tomb with Leoric's Crown, to protect the citizens of Tristram.

The player must visit the tomb in order to retrieve Leoric's Crown, which is needed to defeat the Skeleton King for the last time.