The Caverns of Frost are, as the name suggests, caverns filled with frost.

Use the Bridge of Korsikk waypoint to get to the Fields of Slaughter in Act III of Diablo III, the area always spawns a single cavern. Most of the time it spawns the Icefall Caves and 30% of the time, the Caverns of Frost .

The Caverns of Frost has two levels with the main enemies being: 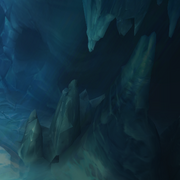 There is a chance that a rare, purple-named mini-boss named Chiltara (A unique Wintersbane Huntress) will spawn within the cave. Another Unique Monster encountered in here is Zelusa the Grasping.

The spawn rate of Chiltara is unknown but is conceived to be low (<10%) and this rate is not affected by magical drop rate.

Upon defeat, Chiltara has a very low chance to drop an account-bound item named Gibbering Gemstone. The Gibbering Gemstone is one of the ingredients in crafting the Staff of Herding to get to Whimsyshire. This may be different for console versions.

As of patch 2.4.1 it appears that she spawns a large percentage of time, but getting the gemstone to drop has a very low percentage. She usually appears right at the end of the cave, be it by the Resplendent Chest, the Teleporting Stone or in a dead end tunnel.

There is often a Treasure Goblin somewhere in the caves and also a Cursed Chest.