Many Containers are constructed from bones and come in various shapes and sizes. Most bone containers do not contain traps.

These containers were probably constructed by demons, perhaps as personal storage chests that also serve to display their sadistic might over the humans or lesser demons used for the building materials.

Bone Chests are small containers in which several ribs are snapped off to gain access to the contents.

Hung Skeletons are shrine-like stone enclosures with a small skeleton hung inside. The skeletons are too small to be from normal people, indicating that they may in fact be the remains of smaller demons.

A specific kind of Hidden Stash is a larger Hung Skeletons that may be big enough to be human bones. Some other containers are also called Hidden Stashes.

Skulls and Rocks can be found on Mount Arreat. When touched, the skeleton will sit up and shake its head with a rattling noise before returning to an eternal slumber, it may be enchanted with demonic magic to frighten the faint in heart, or perhaps the body still contains its tortured soul that is trying to cry out to the human that approached it.

Burial Chests may possibly have been hurriedly constructed by humans within which to place their companions that fell in battle. 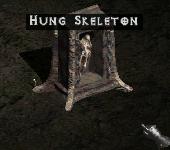 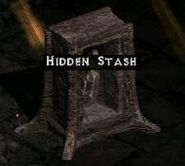 Add a photo to this gallery
Retrieved from "https://diablo.fandom.com/wiki/Bone_container?oldid=57289"
Community content is available under CC-BY-SA unless otherwise noted.