This cave quest involves running some errands for Adria and Pepin. It is initiated by presenting the Fungal Tome, an item found on the ninth level of the labyrinth, to Adria the Witch. She will tell the hero to find a Black Mushroom. Also on the ninth floor is a patch of mushrooms. Clicking on the mushroom patch (but only after delivering the Fungal Tome to Adria) will drop the Black Mushroom which can then be conveyed to Adria.

Adria will inform the hero that Pepin wants the brain of a demon for an elixir, which she then wants for herself. The next monster killed anywhere, be it the Cathedral, or Hell itself, will yield the necessary brain. When Pepin is given the brain, he rewards the hero with the Spectral Elixir. By now, Adria has completed her recipe and does not need the elixir, so she will tell the hero to keep it. Thus, the Spectral Elixir, which boosts each of the four primary stats by +3, becomes the reward for the quest.

"What do we have here? Interesting. It looks like a Book of Reagents. Keep your eyes open for a Black Mushroom. It should be fairly large and easy to identify. If you find it, bring it to me, won't you?"

"The Witch Adria seeks a Black Mushroom? I know as much about Black Mushrooms as I do about Red Herrings. Perhaps Pepin the Healer could tell you more, but this is something that cannot be found in any of my stories or books."

"If Adria doesn't have one of these, you can bet that's a rare thing indeed. I can offer you no more help than that, but it sounds like a... why, a huge, gargantuan, swollen, bloated mushroom! Well, good hunting, I suppose."

"I think Ogden might have some mushrooms in the storage cellar. Why don't you ask him?"

"Ogden mixes a mean Black Mushroom, but I get sick if I drink that. Listen, listen... Here's the secret - MODERATION IS THE KEY!"

"Let me just say this. Both Garda and I would never, ever serve Black Mushrooms to our honored guests. If Adria wants some mushrooms in her stew, then that is her business, but I can't help you find any. Black Mushrooms... DISGUSTING!"

"I don't have any mushrooms of ANY size or color for sale. How about something a bit more useful?"

"It's a big, Black Mushroom that I need. Now run off and get it for me so that I can use it for a special concoction that I am working on."

"Yes. This will be perfect for a brew that I am creating. By the way, the Healer is looking for the Brain of some Demon or another so he can treat those who have been afflicted by their poisonous venom. I believe that he intends to make an elixir from it. If you can help him find what he needs, please see if you can get a sample of the elixir for me."

"The Witch told me that you were searching for the Brain of a Demon to assist me in creating my elixir. It should be of great value to the many who are injured by those foul beasts, if I can just unlock the secrets I suspect that its alchemy holds. If you can remove the Brain of a Demon when you kill it, I would be grateful if you could bring it to me."

"Why have you brought that here? I have no need for a Demon's Brain at this time. I do need some of the elixir that the healer is working on. He needs that grotesque organ that you are holding, and then bring me the elixir. Simple when you think about it, isn't it?"

"Excellent, this is just what I had in mind. I was able to finish the elixir without this, but it can't hurt to have this to study. Would you please carry this to the Witch? I believe that she is expecting it."

"What? NOW you bring me that elixir from the Healer? (sighs) I was able to finish my brew without it. Why don't you just keep it..."

This quest does not reappear per se in The Darkening of Tristram event in Diablo III, but finding the Rotten Mushroom will lead to a similar chain of events, ultimately rewarding player with Wirt's Leg and Royal Calf. 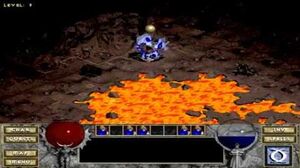