Start a Wiki
For other uses of Beast, see Beast (Disambiguation).

The large, sluggish beasts can thrive in any grassland or forest, provided there is enough water. Farmers will recognize these brutes as the savage cousins of the common packbeast-- a tame breed that was likely domesticated nearly two thousand years ago. One can hardly imagine the trouble that effort must have taken. — Abd al-Hazir

In Act III, the Horned Goliaths appear in Icefall Caves and Caverns of Frost. In Act V, one can also see the armored variant (called Horned Charger), as well as Beasts of charred bones, skeletal in appearance. All these types are identical in terms of abilities.

Beasts are slow, but tough opponents, whose most famous attack is their bull charge. Before charging, they pause for a moment, pawing with one forelimb, and snorting a great plume of steam before rocketing straight ahead, and subsequently hitting the player. One can dodge this attack by simply moving out of the beast's way (it charges at the point where player was when the Beast starts preparation), but if it hits, it will cause high Physical damage, brief Stun and Knockback. Their own melee attack is rather fast, and while it deals less damage than charge, several Beasts can break hero's casts continuously.

Beasts are encountered in Acts I, III and V.

Originally the Beasts were known as the Horned Ground Sloth. 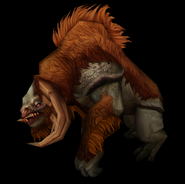 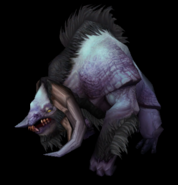 Skeletal Beast
Add a photo to this gallery
Retrieved from "https://diablo.fandom.com/wiki/Beast?oldid=169971"
Community content is available under CC-BY-SA unless otherwise noted.