View source
"The armies of Light and Shadow shall clash across the fields of eternity..."

- Prophecy of the End of Days(src)

The Battlefields of Eternity (a.k.a. Forgotten Battlefield[1]) are a massive ancient battleground in Pandemonium, adjacent to the Pandemonium Fortress. Over the ages of fighting, Demonic Legions and Angelic Host clashed across it again and again.[2]

Battlefields of Eternity is visited in Act V of Diablo III as a playable location.

The Nephalem's task is to find the Timeless Prisons, set the demons trapped inside free and retrieve their Siege Runes to power the colossal battering ram. While doing so, they will encounter Ancient Beasts scouring and scavenging the battlefield, as well as remnants of demonic armies and even some angels sent by Imperius to assist in distracting Malthael's forces.

Events found in this zone:

Realmwalker roams the battlefields, wandering across the wasteland.

Visually, Battlefields of Eternity are a warscarred barren covered with crumbled fortifications, ruined siege weapons, piles of armor and weapons of dead warriors, impaled corpses, dead Siegebreakers, as well as ruins and bunkers, many of which are still inhabited (for instance, Hideout of the Lost Legion, where the Fallen hide). It is a very large zone, with many unmarked events, such as a Resplendent Chest that spawns a hundred Scouring Chargers when opened.

Shock Towers may be found across the battlefields. Minefields can also be encountered, similar to those found in Act III, but smaller and without Knockback. From time to time, players may find themselves close to a falling meteor, which deals Physical damage and Knockback and causes some Scouring Chargers to emerge. Some meteors are molten, therefore leaving a pool of Fire-damage dealing magma.

For players who need a large amount of Reusable Parts, farming piles of Decaying Armor and Decaying Weapons in this zone is probably the best way to obtain poor and common quality items.

The ram waiting below

Entrance portal and countless fortifications seen in the distance

Overlook of the Fortress entrance

A decaying corpse of a massive demon beast

The original artwork with Titans 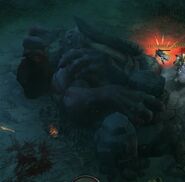