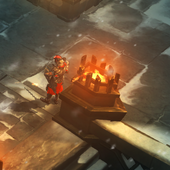 The Bastion's Keep Watchtower is a small zone where the player will spawn at the beginning of Act III in Diablo III. It is here where Tyrael will inform the player about what is going on in the beginning of the act. The path that leads out of this zone leads to The Armory.

The Watchtower is also where Adria commits the betrayal that ends Act III, a monstrous act that leads to the death of Leah and the rebirth of Diablo as the Prime Evil. Going through the fiery portal that Diablo opens to invade the High Heavens will end Act III and start Act IV.

While Bastion's Keep Stronghold still serves as the main town in Act IV, the player is unable to access this area or The Armory during that act.