Barrels are a recurring type of container in Diablo series.

Barrels are characterized by the following:

Barrels can only be broken by touching them, and when smashed open, many barrels explode, dealing random damage to the character (but not monsters nearby). Skeletons also sometimes spawn from broken barrels. Barrels can easily kill an unwary hero, so healing before opening them is advised.

Barrel explosions are not traps that will emit a triggering sound before detonating, they explode instantly and are unavoidable.

Barrels often are grouped together, and when one explodes, it will also detonate any other explosive varieties standing immediately adjacent to it.

The loot they drop, if any at all, is generally not very good and with their high chance to explode, they may not even be worth the effort.

Barrels return in the second game, and function in exact same way as in the first game, except for their damage is much less significant, and can damage monsters as well.

In Act V, there is a different type of barrel. These stone barrels are usually not found in groups, and while they do still frequently explode, they do not inflict any damage. 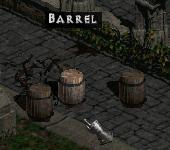 A typical barrel cluster
Add a photo to this gallery

In the third game, barrels can no longer damage players; instead, barrels of oil (marked with a lit oil lamp) will explode when damaged, delivering fire damage, stun and knockback to nearby monsters. Normal barrels usually contain nothing, but sometimes still drop gold and spawn Skeletons.

Torture Barrels in the Halls of Agony will always spawn Risen Dead or Hungry Corpses.

Covetous Shen will be found in a huge barrel, which has become famous among player community. See the respective articles for details.

Mysterious Barrel is a type of container similar to Mysterious Chest, a unique barrel containing Mace of the Crows. 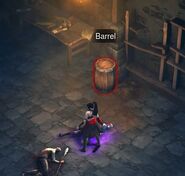 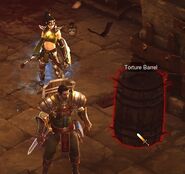 Torture Barrel
Add a photo to this gallery

Baskets and Crates are like barrels in that they are kicked apart to open. They do not explode however, but can be trapped.

Add a photo to this gallery
Retrieved from "https://diablo.fandom.com/wiki/Barrel?oldid=158068"
Community content is available under CC-BY-SA unless otherwise noted.