"I suspect that the barbed lurker is part demon, for its appearance has an aspect far too sinister to occur naturally. It expels a noxious poison worthy of the Hells, and from what I can tell, it will only feed on its own kind or the corpses of demons. One hopes it will never encounter a human."

Barbed Lurkers are Ancient Beast monsters found only in the Battlefields of Eternity in Act V of Diablo III, or in Nephalem Rifts.

Barbed Lurkers attack by releasing three medium-ranged slimy worms, which deal high Poison damage over time in addition to instant Poison damage, in essence, each worm hitting hero 4 times over 3 seconds. Because of this effect, groups of Barbed Lurkers are extremely deadly if player comes close to them. Barbed Lurkers do not have a melee attack and flee if one gets in close combat to them (performing a backflip if needed). The best way to counter the Lurkers, due to their slow movement and short range of the worms, is kiting and killing them from range. 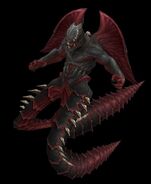 This section contains facts and trivia relevant to this article.
Retrieved from "https://diablo.fandom.com/wiki/Barbed_Lurker?oldid=171117"
Community content is available under CC-BY-SA unless otherwise noted.