"The Barbarian has unparalleled strength and expertly wields an entire arsenal in battle, with a weapon for every occasion. He bellows intimidating war cries and unleashes ground-shaking slams to send approaching hordes reeling."

The Barbarian is one of the classes of Diablo IV.

A brutal, physical warrior, the Barbarian roams around the battlefield constantly, dishing heavy damage and wielding an array of powerful weapons with ease. With the Arsenal system, Barbarians can swap between different types of weapons, such as from a heavy two-handed mace to a pair of sharp, agile hand axes, depending on the situation, skill, and your player needs.[1] The Arsenal can be composed out of two two-handed and two one-handed weapons, with affixes applying from all four at once, but only one or two at a time used to resolve attacks.

Barbarians will be able to haul around four total weapons and swap between them dynamically at any time. You’ll also be able to assign specific weapons to different skills, allowing advanced players even greater depths of customization.[1] Several skills specifically require the equipped weapon to be bludgeoning, such as Maces, or slashing, such as Swords; some skills may require Dual Wielding or Two-Handed weapons; using such a skill immediately swaps the Arsenal to the best fitting weapons.

Barbarian may bestow immunity to Crowd Control upon themselves or others, as well as other useful bonuses, via Shouts (working similarly to D2 and D3 skills of the same name).

As a Barbarian, each point of Strength increases the damage of their skills, while Willpower improves Fury generation, and Dexterity grants critical chance.[2]

When designing the Barbarian, classical barbarian imagery was looked at along with the takes on the class from previous games. The arsenal system was added to reflect how, invariably, takes on the Barbarian in the past had always shown the class equipped with heavy weaponry (swords, axes, and polearms).[3] 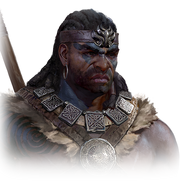