"I tire of the empty battles I once craved. I wander, outcast, while my tribe curses the gods who abandoned us. Our home is in ruins, yet I stand firm. Six days ago, the falling star struck the town of Tristram. The dead rose in its wake. What evil is this? Could it be what I have sought these long years -- a foe worthy of my blade?"
—The Barbarian[1]

The Barbarians were the first of five classes to be confirmed in Diablo III. They play similarly to the previous Diablo II Barbarian, with a few skills from that game carried over to the third installment.

For ages, the Barbarians dwelling in the shadow of Mount Arreat were shaped to be as strong and unyielding as stone. Immense in size and unmatched in ferocity, they were charged from birth with a duty passed through generations: to protect the sacred mountain.[2] and the Worldstone within. When their homeland was shattered and the Worldstone destroyed, many Barbarians lost faith.[3] They became aimless, haunted by their past, traveling from place to place without honor or direction.

But not all Barbarians have given up their vigil. Some still honor the harsh snows of Arreat's summit and prowl the outskirts of its crater. They recall being handed axes and spears at an age when city children were clinging to their toys...and they burn with shame at the failure of their people. These Barbarians strive to find a new purpose for themselves in a changed world, and they will crush any who stand in their way.

Among these Barbarians is one who searches for hope. Through the evil that has taken hold of Sanctuary, this Barbarian sees a means to rekindle the Barbarian culture, and give them a reason to fight. Only in the midst of combat does this Barbarian truly feel alive. A peerless combatant, this Barbarian may appear to lack finesse, but is renowned for their weapons expertise. Strong and noble, fearless and resolute, the Barbarian is a warrior to the core.[2] Yet the Barbarian grew weary of battle that were once craved. But with the sight of a fallen star, the Barbarian was drawn to Tristram, hoping to find what they had long sought—a foe worthy of their blade.[4]

The Barbarian class is based on physical strength, which stems from his/her connection to the Ancients. Thematically, the Barbarian is based around earth and might.[5]

As the Barbarian is a class specializing in brutal melee combat, all who choose to play as one will gain +30% built-in damage reduction, before all other factors are counted in. Most skills are designed for close combat (or short to medium range), and only melee weapons can be used. Barbarians may equip Mighty Belts, as well as Mighty Weapons and Two-Handed Mighty Weapons, which are simply too heavy for any other class. Barbarians can use dual-wielding.

In battle, Barbarians are an endless barrage of melee blows, becoming stronger with each strike, and even as enemies damage them. Barbarians make extensive use of 'on hit' and 'on kill' effects, becoming deadlier as the combat rages on.

The Barbarian's skills are very similar to those of Barbarian from Diablo II, only much more primal, savage and, in a way, more spiritual. Some of the crowd-control skills like Grim Ward are missing, yet many more have come to replace them.

Originally, the skill trees were divided into three distinct play-styles (read builds) with the Juggernaut being especially liked by the fanbase because of the overall coolness of the name, as well as the great variety of all-purpose skills in the tree. However, later the three-tree system was replaced.

Unlike their previous incarnations, the barbarian now uses Fury for their skills. This system, combined with short range of attacks, forces the Barbarian to remain in combat for a long time, always in melee, making them vulnerable to effects that other classes can easily outrun. Reckless assault of a Barbarian can be deadly for the enemy, yet it also brings high risk for the fearless warrior.

Almost all skills are Physical, but can be modified to use Fire, Cold or Lightning damage type. Many of them are variations of crushing melee blows, hitting multiple enemies at the same time. Stun, Bleed, Knockback and Slow are frequent side effects, as well as Fear and Freeze with certain runes. Notable skills are Ancient Spear that may (depending on rune choice) drag enemies towards the Barbarian, leaving little chance of escape, Call of the Ancients that summons spirits of the legendary warrior keepers of Mount Arreat, and the dreaded Wrath of the Berserker, which turns the Barbarian into a striding giant with molten skin of living metal. Barbarians may fight through the worst of injuries, endure pain that would kill a weaker warrior, quake the ground with their very treads and call forth unstoppable avalanches from the sky. War Cries and Leap return as well.

The Barbarian was a "must have" in Diablo III for Jay Wilson, and the first class created for the game. During development, there was some talk to make a Barbarian-like class that wasn’t called Barbarian. However, in Wilson's mind, these concepts failed to pass the duck test, in regards to distinguishing them from the Barbarian archtype. As the first class, the Barbarian became the baseline against which all future classes would be compared. Its model was down-sized in order to fit the environment (e.g. the original model was too big when compared to some doors.[7]

During development, it was originally intended that the male Barbarian be the same individual as the one from Diablo II.[8] This led to issues in the game in that things had to be explained differently to the other characters (newcomers) as opposed to an experienced character.[9] It was later decided that the Diablo III heroes should be unique to the game itself, and thus the characters were made separate.[8] Appearance-wise, the Barbarian originally had a full beard with a mustache, but this was later dropped, with his beard shorter without a mustache.

The male Barbarian's design was intended to invoke the world-weariness of his kin in the timeframe of the game—a gray-bearded veteran who can't stop killing demons. Artists referred to the male Barbarian as "the Barb." The female version was designed to be younger than her male counterpart but just as capable. This was reflected in her design, with the artists avoiding a slender build.[10] 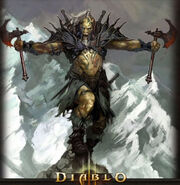 A Barbarian with blood-stained axes atop a mountain 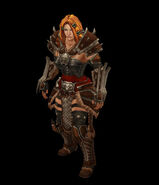 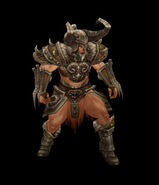 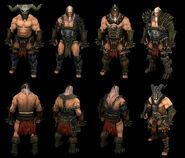 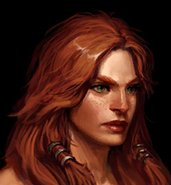 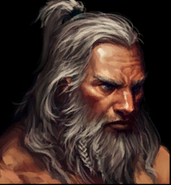