Banners are a customizable gameplay feature in Diablo III. Each player has one, adjustable both from the main menu and in game, one for all characters. Other players can see this banner too, making the banner, in a manner of speaking, a visiting card of the player.

Whenever the player joins a party or logs into a game, or just watches the character selection screen or profile, they will see their banner (in game, it is located in town, near the waypoint). Banners can be customized in the following way, so that each player can have a unique one, if they wish:

These elements may be combined as the player sees fit.

There is a set of standard elements that any player can use from the start. New Shapes, Sigils, Patterns and Accents can be only acquired through achievements, although not every achievement gives any of these. There are no new Dyes available.

Banner elements are also awarded for participation in Seasons, pre-ordering other Blizzard Entertainment games, or participating in real-life events such as buying a virtual ticket for BlizzCon.

Originally, a banner was also supposed to have other elements, such as skulls and trophies beneath the pole. It was removed in the final version of the game.

In-game, the banner serves a purpose in multiplayer: by clicking it, other players may teleport directly to the banner owner's position. One banner is placed in each town per player.

Also, with a keystroke (the default setting being the 'G' key), a player may summon their banner down upon the location their cursor was pointed at. Aside from simply being there for show, the banner lasts for a few seconds, during which the location it lands on pings on the mini-map, similar to the ping that a quest objective has when a player is closeby.

Early version of the customization interface 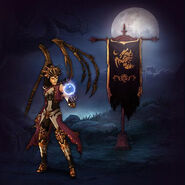 Zerg banner (for pre-ordering Starcraft II: Heart of the Swarm)
Add a photo to this gallery
Retrieved from "https://diablo.fandom.com/wiki/Banner?oldid=120755"
Community content is available under CC-BY-SA unless otherwise noted.