"We are a race of joy and nurturing that is tainted and tempted by sin, but rare is the human who sets out to commit sin: sin is a web we are drawn into."

Diablo
(mentioned only)
Diablo Immortal
Diablo III
Diablo Chess
Legacy of Blood (mentioned only)
Sword of Justice
Book of Cain
The Art of Diablo III
Azmodan, the Lord of Sin was a Lesser Evil of the Burning Hells and was the last of the Great Evils to be trapped in the Black Soulstone.

"The Valrous manuscript lists Azmodan as the best battlefield commander of all demons, having defeated the angels many times in the Eternal Conflict across Pandemonium and the Prime Evils in the demonic civil war. If the Lord of Sin ever assaults our realm, we truly have much to fear."

As with all the Evils, Azmodan originated from one of the seven heads of the great dragon Tathamet. He lorded over the Realm of Sin.[2] For much of his existence he desired to be the sole ruler of Hell.[3]

During the Great Conflict, Azmodan successfully defeated his angelic foes many times on the battlefields of Pandemonium.[4] In one such battle, Azmodan faced the archangel Tyrael. Tyrael bested him and stood ready to deal the final blow. However, one of Tyrael's comrades called for aid and Tyrael rushed to lend aid. Azmodan thus escaped the angel's wrath.[5] In another battle against Tyrael (or possibly the same), Azmodan came under direct attack by his angel foes, who were able to use their wings to outmanauver his host and assault him directly. Frustrated by his near defeat, Azmodan began breeding winged demons capable of tearing the angels asunder.[6]

In another battle, Azmodan fought alongside his fellow demons against angels, among which Inarius was present.[7]

The Sin War was waged by the Prime Evils secretly, the existence of Sanctuary and the nephalem kept from the Lesser Evils. This lack of trust soured relations between the Lords of Hell. What enraged Azmodan and his allies even further was that the Primes seemed intent on converting Man to their side of the Great Conflict rather than fighting the war directly. [2]

Azmodan's first attempt to wrest power involved his close followers—demons that performed acts that he could not or would not be involved in. However, the attempt failed and in his wrath, Diablo turned Azmodan's followers into the Fallen Ones. The infuriated Azmodan held them responsible for the Prime Evils' continued reign, and so he left the fallen in their new bodies, where their degradation would serve to amuse him for all eternity. However, the fallen demons had nonetheless provided him with valuable information.[8]

"Follow my orders, Azmodan, as you did in ages immemorial."
You lead us only to failure, brother! I make my own way."

Believing that they were innately superior to mortal kind, and that their war against the High Heavens was theirs alone to fight, the Lesser Evils enacted a stratagem to overthrow the Primes. Led by Azmodan and Belial, Lord of Lies, the rebel demons claimed dominion over much of the Burning Hells. Although the Primes exacted a heavy toll on the rebels, they were, in the end, banished to the mortal realm, weakened and bodiless. Azmodan believed that with the Three set loose upon humanity, Heaven would be forced to turn their focus to the mortal plane, thus leaving Heaven potentially vulnerable to attack.

Most accounts state that Azmodan and Belial soon turned on each other, relations souring as they began arguing over who should ascend to the highest rank of the Burning Hells. When the bickering turned to violence, their pact was forgotten, and Hell's denizens found themselves having to choose their allegiance once again. The result was another civil war. Yet others say that there was no falling out between Azmodan and Belial in the first place, and that they began conspiring to subjugate all life to their will.[2] In truth, Belial and Azmodan did wage war up until at least the Darkening of Tristram. At this point, Azmodan had held the advantage in the Hells' civil war for awhile.[9] However, the two demons nonetheless came to share the same goal of subjugating humanity into their fold.[10] Not content with ruling over the Realm of Sin, Azmodan set his sights on Sanctuary.[11]

By the End of Days, Azmodan and Belial controlled half of Hell each. While not necessarily enemies at this point, they were still "more rivals than allies."[1]

"You thought you were so clever, that you had outwitted us all. One by one, our brethren fell into your trap, but not me. I defy you! I now know the Black Soulstone is the key, and it shall be mine. Soon, my armies shall pour forth from the Shattered Mountain, ravaging this world and all hope of resistance. My minions will find the stone, wherever you choose to hide it. Then, at long last, Azmodan shall reign as the Prime Evil."

After Belial's defeat at the hands of The Nephalem, Leah had a vision of Azmodan where he revealed that he intended to lead a full-scale invasion of Sanctuary to find and claim the Black Soulstone with which he could become a fusion of all the Great Evils, the Prime Evil. The vision held true and Azmodan's armies poured forth from the Arreat Crater and laid siege to Bastion's Keep.[12]

His lieutenants, the Sin Lieutenants, were introduced, with Ghom, the Lord of Gluttony, storming the depths of Bastion's Keep while the Nephalem rallied the stronghold's defenders and raised its catapults.[5] Azmodan projected his visage to his foes in an effort to strike fear into their hearts, but had the effect of him unintentionally prematurely revealing his plans.[3] The Nephalem destroyed Ghom[13] and fought their way across the battlefield, destroying Azmodan's war machines. Once again, Azmodan appeared as a vision before The Nephalem, stating that even the destruction of his war machines didn't matter, that he could count on a limitless supply of demons to reinforce his army. Tyrael was unfazed, stating that all Azmodan had left to hurl at them were words.[14]

Azmodan's consort, Cydaea the Mistress of Lust, tried to slow the Nephalem as they fought through the portion of Hell just inside the crater and destroy the Sin Hearts, relics from the depths of Hell that empower the demons. Eventually Cydaea was slain as well and the Sin Hearts were destroyed.

At last the Nephalem confronted Azmodan himself, who reiterated his desire to become the Prime Evil. His plan was ultimately left unfulfilled when Azmodan was defeated and his spirit was sealed within the Black Soulstone, making him the final of the Great Evils to be locked in the stone. Shortly afterwards one of Diablo's secret operatives revealed the Lord of Terror's own plan to become the Prime Evil had reached fruition and the Black Soulstone was bound to Leah's body, through which Diablo manifested himself and proceeded to assault the High Heavens.[15]

Diablo was defeated,[16] and the Lords of Hell were imprisoned in the Black Soulstone, their souls screaming for vengeance and release.[17] The artifact was destroyed by Malthael, which released Diablo,[18] still bearing the essences of Azmodan and the other Evils.[19] Eventually however, Azmodan's spirit was able to break free from Diablo, just as all the other Evils.[20]

Azmodan briefly appears in Diablo Immortal during the character select sequence of the Crusader.[21][22]

The Stain of Sin Soul Shard can be obtained. It represents Azmodan.

Azmodan is the final boss of Act III of Diablo III. He must be fought on a circular arena with a large central pillar, surrounded by chain barriers, the combat starts once player enters the ring. Azmodan moves and attacks slowly, but the main danger is his abilities. He has a total of six, most of them used regardless of whether or not he is currently performing any other attack:

On Torment difficulty, Azmodan has a hard enrage timer of 3 minutes. Once it expires, Pools of Destruction will cover the entire arena and will not fade until the fight ends.

Concept art of Azmodan shows him being bi-pedal during early stages of development.

Azmodan is a playable character in Heroes of the Storm. He retains his Black Pool, Eye Beam and Globe of Annihilation attacks, as well as ability to summon Demon Troopers.

"Only fools celebrate victory before the battle’s begun. Along with Belial, Azmodan has ruled the ravening hordes of the Burning Hells for over three centuries. His cunning is beyond imagining."

Azmodan was a clever manipulator who traded in vice and corruption. Passionate and plotting, he was by far the most charismatic and seductive of the Great Evils. He loved vice in all its forms, but the truest gratification he derived was that from the failure of others. He was a master of temptation, of causing those who held steadfastly to principles and beliefs to ultimately betray them. He existed only to shred morality, and to bring all within his sphere of pleasure to the point of breaking, believing that all beings find their truest identity by embracing the far limits of perversion and depravity.[2] No stranger to oppulance or granduer, greed and pride were among Azmodan's favorite sins.[3] He was close to all of his Sin Lieutenants, with Cydaea, the Maiden of Lust being his favorite.[5] He considered her to be "very distracting."[23]

Azmodan was never content with his place in Hell, and always sought more power.[24] He despised the nephalem, considering them to be "creation's greatest sin."[15] He had a low opinion of Belial as well.[5]

Azmodan was regarded as an "uncanny tactician," cunning, and attacked when his foes would least expect it.[25] However, he also possessed a degree of overconfidence and arrogance, his dealings with the Nephalem at Bastion's Keep being an example.[3]

Azmodan's appearance reflected his station as the Lord of Sin. He was extremely corpulent, emphasizing his dominion over the sins of Gluttony, Sloth and Greed. He appeared to walk on six insect-like legs which, along with his torso, were opulently decorated with treasures and trophies, mirroring the sins of Pride and Wrath. His face featured a large, glowing mouth full of dagger-like teeth and a forked tongue, and his visage had four glowing eyes. From his back, two large horn-shaped appendages extended. 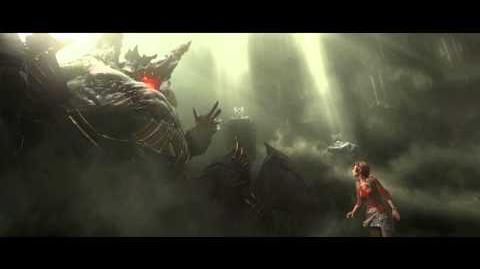