Inside, there are two Books of Vileness on stands adjacent to circles on the floor. Reading each one will teleport the hero into a room with several Hellspawn, a type of Succubus demon. After both Books of Vileness have been read, a new circle will appear where the hero entered the Unholy Altar. Using this will teleport the hero to Lazarus immediately following a cutscene. Lazarus will declare that the hero is too late and will set off a trap, causing several more Hellspawn and an Advocate to enter the room. Lazarus also has two Succubus bodyguards: Blackjade and Red Vex. The fallen clergyman himself is similar to an Advocate, but more powerful. Defeating him completes the quest, allowing access to level sixteen, and the Diablo quest.

The cutscene shows the Tristram Cathedral with mountains in the background and the shores of a lake to the left. Inside we see a church office, and Archbishop Lazarus resembles at first, a normal man. But as the footage starts to show him up close, his eyes give off a sheer evil, bloodied glow.

"This does not bode well, for it confirms my darkest fears. While I did not allow myself to believe the Ancient Legends, I cannot deny them now. Perhaps the time has come to reveal who I am.

My true name is Deckard Cain the Elder, and I am the last descendant of an Ancient Brotherhood that was dedicated to safeguarding the secrets of a timeless Evil. An Evil that quite obviously has now been released.

The Archbishop Lazarus, once King Leoric's most trusted advisor, led a party of simple townsfolk into the Labyrinth to find the King's missing son, Albrecht. Quite some time passed before they returned, and only a few of them escaped with their lives.

Curse me for a fool! I should have suspected his veiled treachery then. It must have been Lazarus himself who kidnapped Albrecht and has since hidden him within the Labyrinth. I do not understand why the Archbishop turned to the Darkness, or what his interest is in the child. Unless he means to sacrifice him to his Dark Masters!

That must be what he has planned! The survivors of his 'rescue party' say that Lazarus was last seen running into the deepest bowels of the Labyrinth. You must hurry and save the Prince from the Sacrificial Blade of this demented fiend!"

"I was there when Lazarus led us into the Labyrinth. He spoke of holy retribution, but when we started fighting those Hellspawn, he did not so much as lift his mace against them. He just ran deeper into the dim, endless chambers that were filled with the Servants of Darkness!"

"I was shocked when I heard of what the townspeople were planning to do that night. I thought that of all people, Lazarus would have had more sense than that. He was an Archbishop, and always seemed to care so much for the townsfolk of Tristram. So many were injured, I could not save them all..."

"Lazarus was the Archbishop who led many of the townspeople into the Labyrinth. I lost many good friends that day, and Lazarus never returned. I suppose he was killed along with most of the others. If you would do me a favor, Good Master, please do not talk to Farnham about that day."

"I remember Lazarus as being a very kind and giving man. He spoke at my mother's funeral, and was supportive of my grandmother and myself in a very troubled time. I pray every night that somehow, he is still alive and safe."

"They stab, then bite, then they're all around you. Liar! Liar! They're all dead! Dead! Do you hear me? They just keep falling and falling... their blood spilling out all over the floor... All his fault...(groans)"

"Yes, the righteous Lazarus, who was sooo effective against those monsters down there. Didn't help save my leg, did it? Look, I'll give you a free piece of advice. Ask Farnham, he was there."

"I did not know this Lazarus of whom you speak, but I do sense a great conflict within his being. He poses a great danger, and will stop at nothing to serve the Powers of Darkness which have claimed him as theirs."

"You must hurry and rescue Albrecht from the hands of Lazarus. The Prince and the people of this Kingdom are counting on you!"

Sometimes, even after the player defeat Lazarus, a spell bolt that was still en route to their character when they strike him down will hit and kill one's character. Even after the player character keels over and dies, once Lazarus dies at about the same time, the character will still utter, "your madness ends here, betrayer!" in a tone sounding as if they were still very much in full health.

This quest is one of the four quests that appear in Multiplayer mode. Instead of having to retrieve the Staff of Lazarus, the quest is initiated by Deckard Cain anytime after first reaching level fourteen. Lazarus is on level fifteen itself. He is in a room with the Unholy Altar (the altar itself with the sacrificed child, not the mini-level) and several other enemies (Succubi and Mages). Like in single player, Blackjade and Red Vex are guarding him, but this time he also has Bloodlust lurking somewhere nearby. Defeating Lazarus allows the player to continue to level sixteen.

This quest returns as an unmarked, though mandatory, event during The Darkening of Tristram game event. Accessing the Unholy Altar from floor 15, the player is tasked to activate 2 Books of Lazarus. Upon activating either one, the player is teleported into a room full of monsters and unique Succubi. After activating both books and clearing the monsters, Archbishop Lazarus will appear. On his defeat, a red portal will open in the center of the Diablo effigy leading to floor 16. 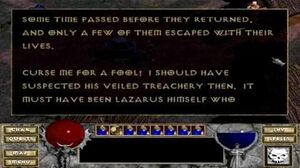